On April 20 from 2 to 3 p.m., our local councillor, MP and MPP are hosting a small business Q&A. If you have questions about help for local businesses during or after the COVID-19 pandemic, you can bring them to Brad Bradford, Nathaniel Erskine-Smith and Rima Berns-McGown. Access the webinar on Facebook or Zoom.

Beaches-East York Neighbourhood Voice is among the latest newspapers to cease printing and move online for good. Publisher Torstar announced the shutdown on April 16. Get the full story.

Shops in Beaches and Leslieville are among businesses hit by the shutdown that you can support from a distance, thanks to a new website. Mayor John Tory is lauding distantly.ca, which has been set up to accept community donations for registered local businesses to help alleviate some of their expenses and help them survive the crisis.

Child care centre set up on Danforth for essential workers

Have you noticed it in Kew Beach, Woodbine Beach or other local parks? Fewer people flouting the city’s social distancing rules and gathering in groups, or using closed park facilities, like playgrounds and fitness stations?

Woodbine Beach is among areas to be blitzed by police and enforcement officers from April 10 to 13 to crack down on groups congregating and people using parks facilities.

The parade on Queen Street East may have been cancelled due to the COVID-19 scare, but it’s just starting online. The Beaches Lions Club that presents the popular event each year is accepting submissions for its first virtual Beaches Easter Parade.

The city set a record for the number of tickets issued and people talked to for using park facilities, like playgrounds, and congregating too closely in parks on Monday. This includes a 40-member group caught using the Stan Wadlow skateboarding park near Woodbine and Cosburn avenues.

By now it must be obvious to you that the Beaches Easter Parade will not be cheering young and old along Queen Street next weekend. But the shut down of local events in midtown, Central Toronto and the east end are now reaching much further — into June and even July.

Here’s our latest guide to what’s been cancelled, postponed or moved online,

You can still get a coffee in the east end…

…though you may have to line up for it, observing social distancing. Coffee shops are setting other restrictions too. Here’s our updated and expanded guide to cafés still offering take-out treats during the coronavirus pandemic.

It’s bad enough our streets are already almost empty with people avoiding the coronavirus, but now we have another reason to stay home. Toronto Public Health is asking residents to avoid non-essential travel today, according to a city media release.

Even the Fox is shutting down now. Ontario’s and Toronto’s chief medical officers have issued their warnings and recommendations about combating COVID-19 and now the speed of local shows being cancelled, venues shut down and programs postponed has accelerated.

We’re trying to stay on top of it with an updated tips list in Streeter news. If you’ve learned of any other schedule changes in the community due to coronavirus concerns, let us know.

Michael Garron Hospital on Coxwell Avenue has opened a coronavirus assessment centre with an entrance separate from the rest of the hospital, MGH announced today. It’s to meet the expected growing demand for testing in Toronto.

But before you rush up there, be aware the centre is taking only patients exhibiting symptoms of COVID-19 — and only by telephone appointment. Read the full story with photos of the new centre.

May 16, 2012 Town Crier staff Comments Off on What do the neighbours think?

Tiny community rallies for its parks

November 2, 2010 Town Crier staff Comments Off on Tiny community rallies for its parks 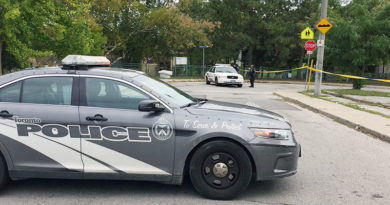 Hit-and-run on Cedarvale treated as homicide