For four years after she graduated high school, almost no one knew where Isobel Duclos worked and lived.

She toiled 12-hour shifts for three weeks straight every month, catching breaks to swim at a beach a safe distance from the mines surrounding her workplace.

Aside from games of cards and pool, she had few other opportunities for social interaction. She could visit her parents once a month in Parry Sound, but couldn’t visit with anyone in Toronto when she went there to catch the train.

Duclos wasn’t a spy, but she helped them out.

That was nearly 70 years ago and her workplace was Camp X, a special facility between Oshawa and Whitby used to train spies and relay communications to allied forces during the Second World War. Duclos is one of the rare few who knows what Camp X looked like on the inside.

“My mother was not too happy when I said I was leaving (to join the forces),” Duclos (nee Farr) says. “But it turned out alright.”

The year was 1942 and fresh out of high school, like many teens of the time, Duclos decided to join the army. After completing basic training in Kitchener, Duclos and an American girl were assigned to the top secret facility set up by the allies to train spies. They were sworn to secrecy, as were Duclos’ parents, and they spent the remainder of the war at Camp X, sending and receiving coded messages for the allies.

The work itself was not difficult — Duclos already knew Morse code from her father, who worked for the railroad— but it’s easy to imagine one might have gotten bored and lonely. Although she spent all day sending and receiving transmissions, she never knew the content of the messages, as they were coded. Ticker tapes at the end of her typewriter were carried to officials, ‘the older men’ as Duclos remembers them, who knew the code.

“We were isolated, really,” Duclos says. “We had no social life, like dances.”

But an upbeat attitude sustained her throughout.

“It just seems I can find a happiness with everything I touch,” Duclos says. Of her time at Camp X she recalls long work hours, but also card games in the rec room, interesting people and beautiful scenery.

“We were like a family. We had a lot of fun. There were boys, there were girls, there were men and women. We played cards, we played games. We very rarely left the camp.”

In 1946, Duclos left Camp X for good. She met her husband at a dance in Sunnyside in Toronto and got married. They moved to Bedford Park where they’ve lived ever since. Today, her daughter, son and three grandchildren don’t live far away. Although she’s nearly 90 now, she still remains active, golfing with her husband and curling regularly.

She’s humble about her service and draws a clear distinction between her volunteerism during wartime and the war itself.
“We weren’t in the war. We weren’t in the battles. At Camp X, we were a long way from Britain where they were actually fighting,” Duclos says.

Perhaps, but at the same time she was part of an operation whose existence was so top secret not even prime minister William Lyon Mackenzie King knew of it until it was suggested the camp be used as a hiding place for soviet defector Igor Gouzenko in 1945. As far as the public was informed, the place was a transmission station for the Canadian Broadcasting Corporation. However Ian Fleming, author of the James Bond spy novels, is said to have trained there as a soldier.

As a result of its top-secret nature, none of the Camp X personnel or graduates were formally recognized for their training or contributions.

Although she volunteered four years of wartime service to the military, it wasn’t until last year that Duclos received medals from the military for having done so. More recently she was asked to speak to a group of schoolchildren about her experiences.

“They were very interested in the war,” Duclos says. “And the Morse code — they just couldn’t wait to start using it.”

Although she hasn’t used Morse code herself in decades, she now looks back on her wartime volunteering as a gift that still resonates with people.

“Now, it’s getting even more interesting because people are interested in learning about it.”

Lest We Forget — And lest we merely ‘remember’ on Nov. 11 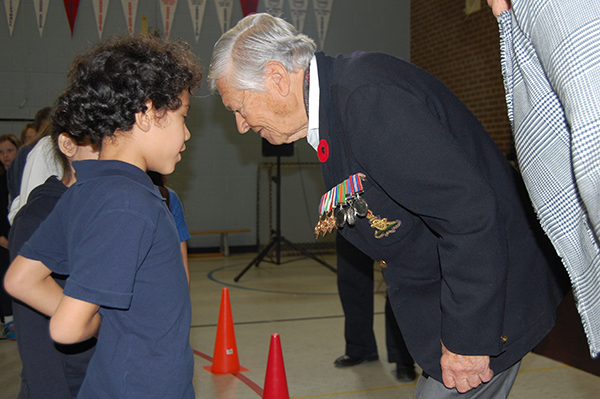