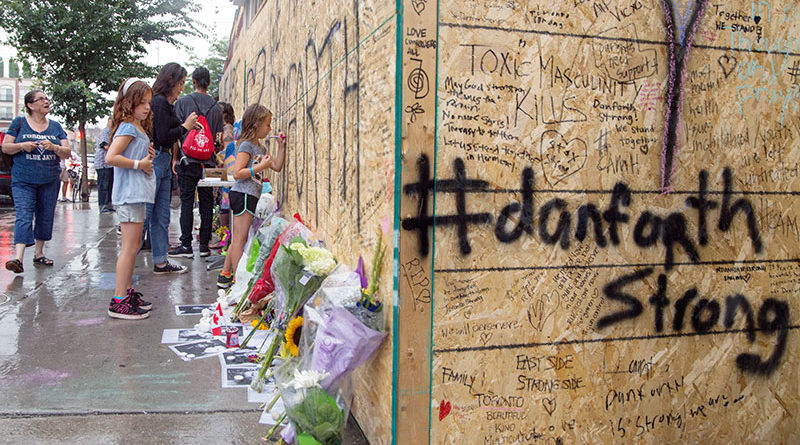 Danforth Avenue has been covered by floral tributes, messages of love, and graffiti proclaiming “Danforth Strong,” two days after three people were killed and 13 injured in gunfire on the street.

Local residents and visitors from other neighbourhoods were once again walking the strip known as Greektown and eating on the patios that were back in business a day after the street was reopened by police.

The numbers, however, were down somewhat from the crowds that previously frequented the popular area of restaurants, bars and boutiques, deterred in part perhaps by Tuesday’s intermittent rain.

“I’m here just to show support, to show we’re not afraid because of what one sick person with a gun did,” said Ashley Jensen, a mother of two from North Toronto, who was writing a chalk message on a bench at Danforth and Logan Avenue.

“Some of my friends said they wouldn’t feel right to come here for a while, but I had to,” she said. “Just like people from across Toronto supported us when that sick person killed people on Yonge Street.”

Meanwhile, the public has learned more about the two female victims of the shooting and the suspected shooter who died Sunday night after an exchange of gunfire with police.

Police identified one of the females who died as a result of injuries allegedly inflicted by the shooter as Reese Fallon, 18.

Fallon had recently graduated from Malvern Collegiate in the Upper Beaches and was planning to attend the nursing program at McMaster University, according to her Facebook page.

A 10-year-old girl was also killed in the attack but police initially said her family did not want her name released. However, late Tuesday evening police identified her as Julianna Kozis of Markham.

Post-mortem examinations of the two fatalities are to take place Wednesday, police said

Thirteen other victims, age 17 to 59, were treated in hospital for injuries ranging from minor to serious.

The Special Investigations Unit, which investigates deaths or serious injuries involving police, revealed on Monday the identity of the deceased man that police called responsible for the shootings, as Faisal Hussain, 29, of Toronto.

Police said investigators are executing a search warrant of an apartment in Thorncliffe Park Drive where Hussain lived with his family.

The family has released a statement saying Hussain faced lifelong “severe mental health challenges” including psychosis and depression, though they never imagined he would come to this end.

“Our hearts are in pieces for the victims and for our city as we all come to grips with this terrible tragedy,” the statement said. “We will mourn those who were lost for the rest of our lives.”

The community around Danforth plans to hold a vigil Wednesday evening at a local church. 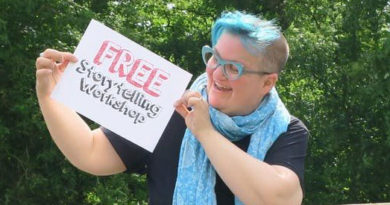