On Nov. 11, Malvern Collegiate staff and students marked the last time their WWI cenotaph will stand tarnished on Remembrance Day.

The monument outside the Riverdale area school has been deteriorating for years, but after outcry from veterans and residents alike, it is finally scheduled for repair.

“We’ll just need to wait for the cold weather and snow to go away and the repairs can get underway this spring,” said Vandra Masemann, president of the school’s alumni society.

Masemann was on hand for Malvern’s WWI-themed remembrance ceremony, along with several local veterans, students and residents.

She delivered a passionate speech regarding the lasting legacy of the conflict, and highlighted the 25 Malvern students that died in it, many of them underage.

The nephew one of those fallen soldiers, Chris Commins, was present and was honoured during the tribute.

“I’m happy that they’re finally going to get this done,” Commins said afterwards about the statue’s due repair.

According to Masemann, locals originally blamed the Toronto school board for neglecting the eyesore, but they were confused over whose responsibility it was.

“What people didn’t understand at first was that the memorial was presented to the school as a gift from the community, local donations paid for it [not the school board]” Masemann said.

After a May front-page story on the Toronto Sun highlighted the need for repair the school board sprung into action, setting up an assessment within weeks, Masemann said.

Though the school had about $3,000 from years of fundraising for the Onward Malvern Foundation. A $10,000 donation from PACE Savings and Credit Union was secured by then –school board chair Bruce Davis.

The Malvern memorial was sculpted in 1922 by Canadian artist Emmanuel Hahn, (famous for his carvings of the Bluenose and caribou on the nation’s dimes and quarters). It features a statue of a soldier. Below it honours the names of the 25 fallen students.

Currently, the figure is missing its right arm, while the base is disintegrating to the point that the lettering is falling off.

Malvern Alumnus Arnie Williamson is also applying for provincial heritage trust fund to ensure the memorial, and other school property across the board, can be maintained in the future.

Fundraising will continue through the rest of the year, and donation forms are still being distributed. Williamson has also approached several private companies in recent weeks looking for support.

Line Pinard, principal at Malvern is now counting down the days until construction begins.

“Every day I look at the memorial I’m saddened,” said Pinard. “I’m anxious to have it restored to how it’s remembered, so people can come back here and appreciate it.

It will truly honour the heroes who sacrificed their lives.”

The repaired memorial is expected to be unveiled in time for Remembrance Day, 2011, or 11/11/11 — a fitting tribute indeed. 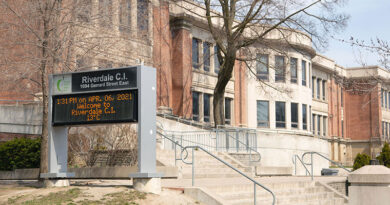 Letters from the past

November 19, 2009 Town Crier staff Comments Off on Letters from the past