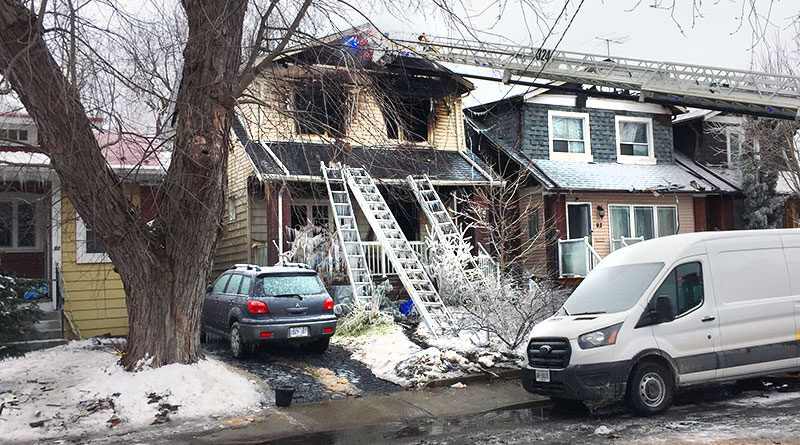 The fire that killed four people at 95 Gainsborough Rd. in January was caused by an electrical failure in the dining room ceiling, an investigation has found.

Investigators also determined there were no working smoke alarms in the house, according to a statement released today.

The investigation was carried out jointly by Ontario’s Office of the Fire Marshal and Toronto Fire Services in collaboration with Toronto police and the Office of the Chief Coroner.

The fire on Gainsborough, near Coxwell Avenue and Eastwood Road in the Beach Hill area, broke out shortly after 4:30 a.m. on Jan. 29 and quickly consumed the top floor of the two-storey house. The fire also spread to the roof of a house next door.

Four people were pronounced dead on the scene or later at the hospital. Two other people suffered injuries.

The tragedy highlights the importance of installing and maintaining smoke alarms in homes, according to the press release from the fire marshal’s office today. More than a third of residential fatal fires investigated by the office are reported to take place in homes without working alarms.

“When a fire occurs, you may only have seconds to get out safely,” Fire Marshal Jon Pegg said. “Installing working smoke alarms and testing them monthly is the most important action an individual homeowner can take to protect themselves and their loved ones from the hazards associated with fire.”

With the time change this weekend, residents are encouraged to change the batteries in their smoke alarms and test them.

“Everyone must take fire safety seriously,” Arija Celeste, a surviving victims of the Gainsborough fire, is quoted in the release as saying. “Keep your family safe and make sure you have working smoke alarms and practise a home fire escape plan so everyone knows what to do when the alarm sounds.”

Celeste lost a son, a mother and a friend in the fire.

The family will not be providing any further comments and media are asked to respect the privacy of the family, the news release says.

“We send our condolences to the family, friends and community of the victims who passed away in the fire and our thoughts are with those injured and/or impacted by this tragedy,” the fire marshal’s office said.

“We also want to thank the first responders, including Toronto Paramedic Services, and the Electrical Safety Authority, who worked collaboratively on scene in very challenging conditions.”