The rubble that was formerly an abandoned collection of once-gracious homes on Bloor Street West is awaiting city approval for a condo project before the owners will clear up the mess.

A suspicious fire, the cause of which is still under investigation, gutted several of the properties between Pacific Avenue and Oakmount Road in late May.

A spokesman for the property owners, Daniel’s Corporation, told the Town Crier he hoped the city will approve the project, which includes townhouses and a tower, by late fall. If that happened, marketing of the project would start in the spring.

Under provincial law, a condo project must be two-thirds sold before construction is allowed to start. But the developer is optimistic the units will sell quick in this upscale area, close to shopping, trendy boutiques and one of the best parks the city has to offer.

That approval can’t come soon enough for Oakmount Road neighbour Giles Blais, who lives across the street from the now partly gutted properties.

“It was a ticking time bomb,” said Blais, who watched the properties deteriorate after being purchased by the developer and left abandoned.

“I visited Detroit in my 20s. I couldn’t believe the beautiful buildings that were left abandoned,” said Blais. “Now I’m living across the street from a whole block of them,”

However, while the properties were abandoned, they were not unused. The buildings became home to both squatters and a makeshift skate park.

In fact, Adrian Tulving-Blais, said that one of the squatters, a man in his 50s named Frank, helped supervise the building of a half-pipe.

The man told Tulving-Blais he used crack and heroine “within reason” and the man appeared to eat well, often seen cooking steaks and eating fresh fruit on an abandoned balcony, which also doubled as an outside toilet.

“He didn’t eat like you’d expect a bum to,” he said, recalling another woman who lived on the site and appeared somewhat confused and unstable. She collected baby items and other discarded items in one of the abandoned garages.

It seemed like an odd juxtaposition to have homeless vagrants squatting in a posh west-end neighbourhood across from High Park, where most homes are well kept and pricey.

Clearing of the site and construction can’t start soon enough for Blais, who along with others in the area have already agreed to the development proposal.

“In my opinion, they should have been torn down five years ago,” he said, shaking his head as he scanned the rubble across the street. 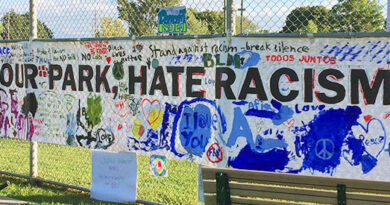 One Bloor gets a second chance

April 8, 2010 Town Crier staff Comments Off on One Bloor gets a second chance