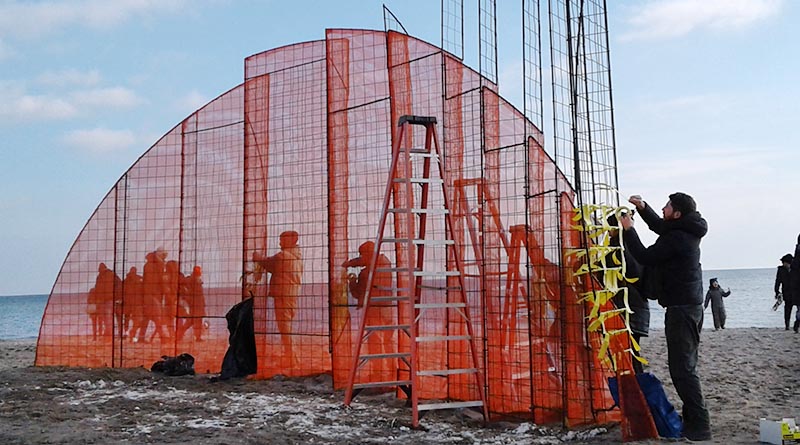 Winter Stations are fewer than usual in number this year but the art installations that opened on at the east-end beaches on Feb. 17 are still drawing attention — and sometimes mystification — from viewers.

And that’s what public art is all about, isn’t it?

Intriguing viewers. Confusing us. Making us laugh. Raising questions about what art is. Prodding us to rethink everyday objects — like the lifeguard stations on the beach.

Judging by the response of the crowds around, inside, under and atop this year’s Winter Stations installations, the art was successful. Each of the four works built over Woodbine Beach lifeguard stands this year (down from last year’s six and 2018’s seven) drew kids and adults alike to explore them and, of course, take selfies with them and post pictures online.

Today has arrived! Please come out to Woodbine Beach to enjoy the installations! Also today we have launched our photo contest, use #ConnectWinterStations2020 in all of your social media posts for a chance to win a basket valued at over $250!

Which is not to say some of the outdoor works aren’t better or more popular than others.

One of the most elementary displays is “The Beach’s Percussion Ensemble” by students of Centennial College in Toronto. The scattering of boxes, some containing wind chimes and drums, practically invites kids to climb over them and leap off into the sand or snow.

“Noodle Feed” is a strange one. The plan by a group called iheartblob of Vienna, Austria talks of the installation creating a “shared augmented reality environment where people can interact in new ways” both physically and digitally.

The reality as presented in the early days of the event is of simply straw-stuffed tubes draped limply over the lifeguard station. Some folks have posted comments referring to it as a bouncy castle, and plenty of visitors seem to enjoy lying or jumping on it.

Visitors are also supposed to use an augmented reality app to enhance their pictures of the installation with “photos, stories and drawings that can be seen by other users in physical space,” though I haven’t seen much of this being done online.

[Editor’s update: Just over a week into Winter Stations, the “Noodle Feed” installation has been removed, apparently due to having been damaged. We’ll have more on this shortly.]

The more elegant “Kaleido­scope of the Senses” by Charlie Sutherland of SUHUHA, Edinburgh is probably closer to what people consider abstract art.

Clean, straight, angled lines extend the station upwards and in several directions. The tower includes bells that clank together in the wind.

It’s a piece that invites admiration from a distance for its design, rather than engage the public. You can climb up into the new, raised seat in the station, though I didn’t se anyone do it.

“Mirage” by Cristina Vega and Pablo Losa Fontangordo of Madrid, Spain may be the most interesting of the works.

As with any illusion, your appreciation of it may depend on the angle from which you perceive it — as well as what time of day it is.

Different perspectives present it as a three-dimensional puzzle, a plane of dazzling sunshine, a dome home, or sun rising over a dome. 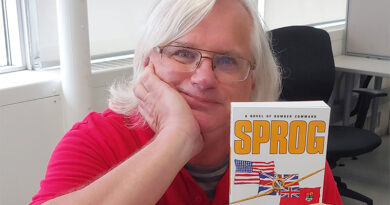 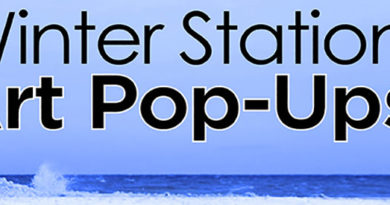 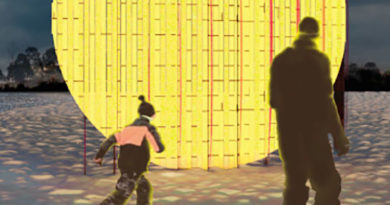