If you’ve never been to the Big Apple, you may be able to find a slice of it on Yonge, north of Eglinton.

The giftware and home accent shop was named after a street intersection that’s in the heart of SoHo, Manhattan and was modeled after some of the boutiques there, Rossi says.

The look of the shop is more modern, he adds, but there are some eclectic pieces and even traditional accessories like ornate picture frames and lamps that mix with coastal products like seashell trays.

With backgrounds in design and staging, Rossi and Djang have cultivated a lot of contacts from whom they source their wares. And Rossi says, they often purchase current styles in singles so there’s not a lot of duplication in the store.

Many people don’t know how to display or arrange decorative accessories, says Rossi, who’s in the store most days. For that reason they’ve set up a table in the back of the store where employees can show customers how to group store items.

Another service they provide, he says, is home service. That is, the store will send an employee with an architectural design background to customers’ homes to help rearrange decorative elements and accents bought from the store.

A native Montrealer who’s lived in Toronto for years, Rossi says Yonge Street was the place to open as it has great foot traffic.

With Valentine’s coming soon, Rossi says there are some great items in store like Archipelago candles, pop-up greeting cards and quirky cards sourced from his favourite city, New York. 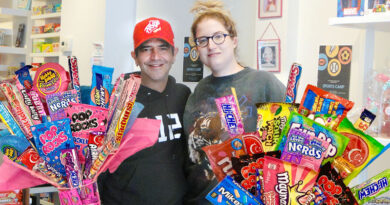 The Candy Man can…open a candy store in Forest Hill