It looks like garbage will continue to be collected and other public services provided in the east end for at least another week.

Art installation removed due to damage

Winter Stations communications team, KG&A, released a statement this morning that the “Noodle Feed” art installation on Woodbine Beach had been removed due to it being damaged “beyond repair.” See the full story.

This morning, even during the light snowfall, art lovers on Woodbine Beach were surprised to find one Winter Stations installation, “Noodle Feed,” was gone. Apparently it was withdrawn due to having been damaged. Winter Stations communications company KG&A says it is about to release a statement on the matter.

We’ll have more on this story here as details are revealed.

A video making the rounds on social media shows a man spewing racist and obscene slurs at a security guard who had asked him to leave the Leslieville store.

The security guard at Value Village claims on the video to have seen the man attempting to shoplift.

The video on YouTube has been viewed more than 50,000 times and has elicited hundreds of comments from viewers denouncing racism and praising the security guard for keeping calm.

The man is wearing a dark cap and a dark jacket over a t-shirt displaying an American flag.

His furious remarks include slurs against South Asians and immigrants.

We’re providing a link to the video for those who wish to view it, but we’re not embedding it here due to the objectionable language.

Review of Winter Stations finds it intriguing and confusing

Winter Stations opened officially on Feb. 17 with four interactive art installations built upon lifeguard stands on Woodbine Beach. This is a reduced size for the event, which had six and seven works installed in the previous two years. But the installations still drew interest from visitors, even if some of them couldn’t figure out what to do with certain works. Our reviewer found both good and bad work on the beach.

A man was arrested on child pornography charges on Feb. 6 after police executed a search warrant near Kingston Road and Main Street, police announced today.

Police allege the man, 42, accessed, possessed, and made available child sexual abuse material. He appeared in court at College Park on Feb. 7.

Peter MacKay lives among us

Did you know leading Conservative leadership contender Peter MacKay is a Beaches resident? If not, you’re not alone. Most east-end residents seem not to be aware of the would-be prime minister making his home in this area. More about this in Beaches-Leslieville news.

Reserve free tickets for assisted dying doc at the Fox

The Fox Theatre hosts a screening of the documentary Road to Mercy, as well as Q&A with experts, on Feb. 11 presented by Beaches-East York MP Nathaniel Erskine-Smith. It’s free but you have to reserve tickets. See the listing for details.

Man dead after shooting at Danforth and Greenwood

Toronto’s ninth homicide victim this year was found by police near Danforth and Greenwood Avenues early this morning. Police say they responded at about 3 a.m. to reports of shooting in the area and located an unconscious man suffering from multiple gunshot wounds. He was rushed to hospital where he was pronounced dead. Police are seeking several persons who fled the scene.

The four winning entries in the 2020 Winter Stations art installation project should start taking shape soon. The annual outdoor art show transforms lifeguard stations along Toronto’s east-end shores. The installations created by designers from Spain, Austria, the United Kingdom and Toronto’s Centennial College will be shown from Feb. 17 to March 29. See more details in the Things To Listing.

Bike lanes are in the Danforth Study now — a pilot project for up to two kilometres anyway — city staff said at the study’s second open house on Jan. 27. It was just one issue for the improvement of Danforth Avenue that the public was asked to comment on at the meeting that drew more than 200 local residents, businesses and workers. Read the full story.

More details in the Things To Do listing.

Winterlicious is back — reserve now

Winterlicious returns to 200 Toronto dining establishments presenting affordable, fixed price menus for two weeks starting Jan. 31. And there are lots of east end restaurants — in Riverdale, East York, Leslieville and the Beaches — taking part in the two-week food fest. Here’s where to make your reservations for local eateries.

Increased shootings and assaults, but few murders in east

Shootings may have increased dramatically in the city in 2019, according to year-end data from the police. But while shootings and shooting victims are up across Toronto, the number of fatalities and homicides is actually down.

In the east end, covered by the former 54 and 55 Divisions, only two murders were reported to have taken place both in East York, leaving Riverdale, Leslieville and the Beaches free of homicides last year.

The most common crime in the Beaches-Leslieville area was break-and-enters. See the full story.

See the main article to find out more about this, including where the cameras have been set up in east-end neighbourhoods.

New garbage bins in the Beach

July 20, 2009 Town Crier staff Comments Off on New garbage bins in the Beach 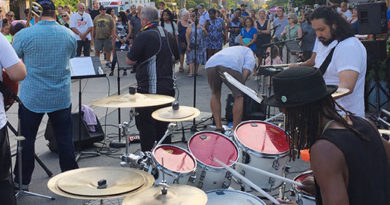