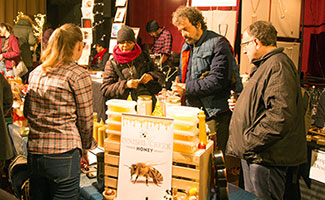 Holiday gift fair on at Tranzac

The Tranzac Club is at 292 Brunswick Ave., south of Bloor Street West.

Back when horses shared Yonge Street with cars

The reinstallation of the Iron Horse sculptures on the Beltline bridge sent us back into the city’s public archives to see what the scene looked like in earlier days. On 1915 the bridge was for train traffic and the only horses were pulling carriages down muddy Yonge Street under the bridge — alongside early gas-powered vehicles.

See the photo and the story of the overpass.

The Iron Horse sculptures have been reinstalled on the Beltline bridge that crosses over Yonge Street.

They’re not exactly the same sculptures first displayed there by artist Robert Sprachman from 1994 to 1996 — those have been sold off and dispersed. But new, more durable “horses” were installed today.

Thousands of kids and parents lined Bloor Street East as the 115th Santa Claus Parade started at Parliament Street this year for a change. A few people hung out on Bloor Street West waiting in vain for the parade that used to begin at Christie Pits, but most caught on to Santa’s changed flight path the changed route. And it was a happy, chatty Santa who welcomed them. More on this year’s parade with pictures in News.

The venerable Heinl has moved into Cabbagetown

If you don’t know the name of Heinl, you’re likely not into stringed instruments like violins, basses and cellos — because everyone in those musical circles knows the name. And now George Heinl and Company is set to bring their fans and customers into the Cabbagetown area, having moved its three-storey shop to 227 Carlton St. near Parliament Street.

For more about the move and what it means to the area’s growing artistic community, see the full story.

Group of 5–8 sought for robbery, stabbing

The news of Central Toronto crime and violence keeps coming — though this is actually one that happened a week ago. Police yesterday just released security camera images of three males, part of a larger group number five to eight, police suspect of being involved on Oct. 26 with relieving Annex-area party-goers of their cell phones, as well as threatening, striking and stabbing some of them. Here’s what we know so far, along with those images.

It was a like slasher horror film, taking place on Halloween, no less. Five young people attending a fraternity house party were slashed or stabbed last night, after two teenagers lashed out after being refused entry to the party, according to police.

A 19-year-old male and 15-year-old female were arrested in the early hours and charged with attempted murder, among other charges. See more on this story in Streeter News. 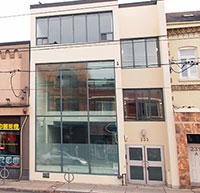 An online petition is approaching its target of 2,500 signatures against having a women’s resource centre move to Carlton Street near the centre of Cabbagetown. The area already has too many social services, which are placing a burden on businesses and the community, some residents say. But the Cabbagetown BIA wants people to note the positive features the centre offers. More on the dispute in News.

Build and play with LEGO Star Wars on Saturday

As listed in our Things To Do, the kids can build and take home the legendary Star Wars starship, as well as play with the new interactive Star Wars lightsaber at the LEGO Star Wars Make and Take Event on Nov. 2. But you have to register first.

Morneau wins his ‘majority’ — in Toronto Centre, at least

Liberal incumbent and four-year finance minister Bill Morneau received more votes than all rival candidates in Toronto Centre put together—again. He took about 57 percent of the vote, winning two-and-a-half times the number of votes won by his closest rival, Brian Chang of the NDP.

The most interest, however, seems to be in what Morneau had to say about proceeding with his party’s agenda despite forming a minority government. For the whole story see the News in Streeter.

A man has been arrested after a woman claimed a driver who picked her up near Bloor Street West and Manning Avenue early Sunday morning sexually assaulted her. See the story.

Explore former “suburb for the wealthy” with the ROM

Tomorrow the Royal Ontario Museum leads a walking tour of the prestigious enclave, Rosedale, the suburb of choice for Toronto’s wealthy citizens in the early 1900s, viewing a national historic site and impressive domestic architecture built more than 150 years old 150 years. See more about this free event in the Things To Do listings.

A large mural, painted on the side of a Green P parking garage at 20 Charles St. E., was unveiled by Germany’s most famous street artist Justus Becker and Frankfurt mayor Peter Feldman, along with local dignitaries two days ago. Its part of an exchange project to celebrate the long relationship of sister cities Toronto and Frankfurt, and celebrates the diversity of both. Get the full story.

Memories of that fateful night — a year later

Former residents of 650 Parliament St. are still displaced more than one year after the devastating high-rise fire that forced their evacuation. Zeba Khan talks to the evacuees who have just received a further postponement of the day they can return to their St. Jamestown homes. Read her account in the news section.

October 26, 2016 Eric McMillan Comments Off on Reconciliation starts right here in our neighbourhoods