The area around Oakwood Avenue and Vaughan Road may not be commonly recognized as an artsy neighbourhood, but in 2008 the city officially recognized Oakwood Village as an arts district.

The first annual Oakwood Village Arts Festival, held on June 10 and 11, celebrated the creativity of the community and sought to raise its artistic profile. The sides of Oakwood Avenue were lined with various events and exhibits from Vaughan Road to Earlsdale Avenue.

“We wanted to get all the good news out here because you only hear the bad news, but there’s a lot of wonderful things happening and great people,” said event co-organizer Cindy Beman. “There was a study done and we have more artists per capita living in Oakwood Village than anywhere else in Toronto.”

More than 20 writers, painters, musicians, singers and dancers were all on hand to demonstrate their crafts. Festival performer and organizer Vanessa Mariga said the weekend was successful in bringing local artists together.

“I think this festival was a really great first step towards allowing the community to crystallize as we move forward with this arts district designation,” Mariga said. “It has given our community a great sense of identity, a very positive identity.”

Mariga was part of a belly-dancing troupe that performed directly across the street from Gary’s Barbershop at 479 Oakwood Ave. Inside the shop, local dub poet Anthony Davis, also known as Peculiar I, held a parenting workshop called More Than a Haircut aimed at Afro-Canadian fathers.

The monthly program has been operating since 2006 and holds meetings at several barbershops along Eglinton Avenue West. The project, which operates out of the Macaulay Child Development Centre, gives tips to fathers on how to support and how to discipline their children, among other topics. It also helps them locate government resources where they can access additional assistance.

Davis said the program is very local now but he and the other three facilitators hope to expand on a national scale in the future.

“The fact that this was supposed to be a pilot project for the month of February, Black History Month, and it’s now in its fourth year, is self-evident that we’re moving along very nicely,” Davis said after ending the seminar with an original poem. “We’re hoping that the sky will be the limit.”

Connie Pereira, mother of two teenage sons, sat in on one of Davis’ discussions during her visit to the festival and said more programs like his are needed.

“I appreciate this project here to help men because there are more services for women,” Pereira said. “Since I have sons I think it’s important that these initiatives continue.”

According to Mariga, the Oakwood Village Arts Festival will be back next year.

“I’m quite pleased,” she said. “I think we’ve managed to lay a foundation in the community and over the years we will build upon it.”

The drive behind a new art show

June 30, 2011 Town Crier staff Comments Off on The drive behind a new art show 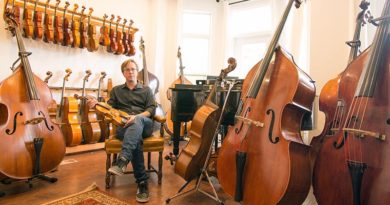