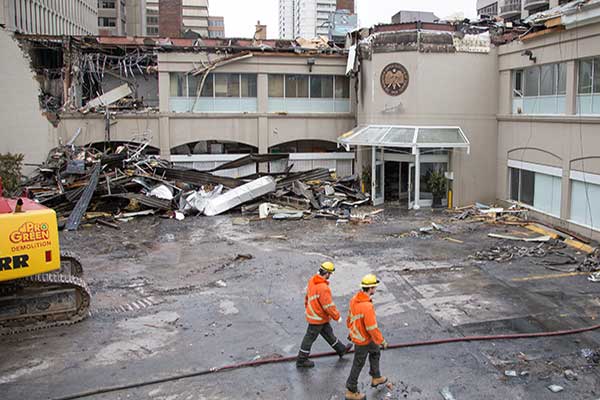 Residents in neighbouring buildings are trickling home and local shopkeepers are looking to reopen, after the fire that shut down part of midtown Toronto was finally extinguished early this morning.

The fire at 25 St. Clair Ave. W., was brought under control at 5:45 a.m., interim fire chief Matthew Pegg reported. However, firefighters were still working on hot spots in the remains of the burnt-out racquet club where the fire had raged, he said.

The fight against the blaze had begun yesterday at 9:30 a.m. By noon hour yesterday, it had been upgraded to a six-alarm fire, the fire department’s most serious designation, as more than 120 firefighters and 22 emergency vehicles were engaged in the struggle.

This morning excavation equipment was brought to the site, which is offset from St. Clair, tucked behind commercial and residential buildings on both St. Clair and Yonge Street.

The Yonge and St. Clair intersection, as well as stretches of road to the south and west, were closed yesterday and have yet to reopen to vehicles or pedestrians.

At 10 a.m. today, Pegg tweeted a picture showing the severe damage caused to the back of the club, nestled up against a highrise building, which seemingly escaped the flames.

The cause of the fire is still unknown, deputy chief Jim Jessop told media this afternoon.

“The Office of the Fire Marshal and Toronto fire investigators continue their preliminary stages of the investigation,” he said. “It’s way too early to even suggest what a cause to be.”

It is hard to explain the amazing job @Toronto_Fire crews did preventing the spread of yesterday's fire – until you see this picture pic.twitter.com/6CXqB6sWa3

However, he did say the fire department is not treating the fire as suspicious.

No one was seriously injured in the fire or in the firefighting efforts, Jessop said, A couple of firefighters received minor injuries due to heavy exertion but were soon released from medical care. 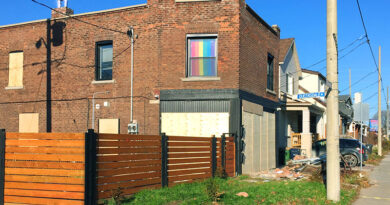 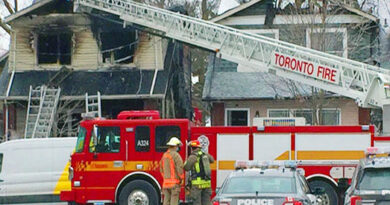