New amenities, including benches, drinking fountains and a community garden, will be coming to Oriole Park as a result of a participatory budget meeting held by Ward 22 councillor Josh Matlow.

Deer Park residents gathered at Christ Church Deer Park on April 16 to vote on a list of additions they would like to see at the park, funded by a section 37 agreement that will see a developer provide $200,000 for improvements to the local park.

“This is an experiment that we’re all doing together,” Matlow told the crowd. “And it’s really interesting how the decisions have been made, I think they really reflect the very conversation we had without even knowing the results.”

Prior to the vote, residents discussed the feasibility of a variety of amenities including an off-leash dog park and a skating rink. However, a fair amount of discussion revolved around leaving the park as is.

Indeed, the top three most voted on items — 10–12 additional park benches, a community garden and four new picnic tables — did not present a drastic change to the park.

Oriole Park will also see a drinking fountain for humans and dogs and improvements to the baseball diamond. Matlow said he would consult with the community on the possibility of a natural ice rink.

Items that were rejected by the community include a barbecue pit, tetherball, chess tables and a basketball court.

Acting president of the Friends of Oriole Park Ulli Rath said the park needs more green space, an option not on the list.

“The way I saw the meeting was trying to find a balance between turning the park into an amusement park, as opposed to a park with green spaces and trees and shade,” he said. “Each time we’re putting something in, we’re sort of taking away from a general park environment.”

Having said that, he was pleased to attend the meeting. Rath says he was irked when the previous councillor spent section 37 funds on parking spaces without consulting the community.

“It’s really a sign of the improved relationship we have with our new councillor and to a somewhat lesser extent, with city hall,” he said.

Davisville resident Michael Black advocated on behalf of the community garden, which he says has been a success at Colborne Lodge in High Park.

“We could have something like that, where local gardeners put in their skills and we’d add a bit of colour to the park,” he said.

Others, like 13-year-old resident Alex Forgay, were excited to hear about the new additions to the baseball diamond, which he says is badly in need of repair.

“It’s not that it’s unusable now, but one of the big problems is that in the outfield right now there’s a lot of potholes in the sod and they cause a lot of injuries when people are running and put their ankles in it,” he said.

The baseball diamond will have its infield upgraded and will have new irrigation and sod for the outfield.

But not all residents had their wishes fulfilled. Theo Wolski was hoping for an area to unleash her dog Reggie. She’s previously received a municipal fine for letting him run free at the nearby Kay Gardner Beltline Trail.

“It would also give the parents and children and people who have a fear of dogs the security of knowing that they’re enclosed in that space,” she said.

While she didn’t get a chance to vote on an off-leash dog park, she was encouraged by Matlow reaching out to her and suggesting a meeting to look into it further.

“It’s nice to feel heard, and it’s nice to have an interaction with somebody that you know is going to be making decisions that affect your community,” she said.

Overall, she said the meeting impressed her.

“It’s always difficult to give the decision to the masses, because there will be conflict … but I do respect Josh Matlow’s decision to allow us to have a voice,” Wolski said. “That’s something I don’t think anyone can complain too much about.”

Although the dogs will have to wait for another day, Matlow pointed out they’re not completely losing out on this one.

“Picnic tables are loved by both children and dogs, for what is at the top of the table and what falls below,” he said. “So that, I think, will make everyone happy.” 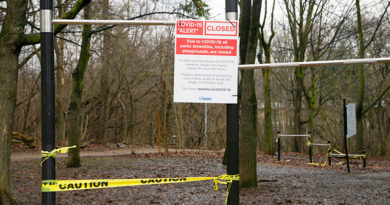