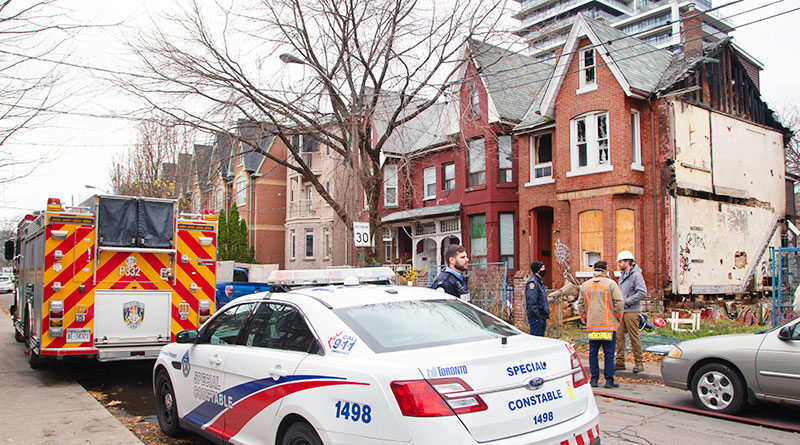 A Kensington Market house suffered about $400,000 in damages from a fire early this morning, according to fire officials, though it may not be the first time in recent history that flames have struck the building.

When they arrived, firefighters found heavy smoke and fire coming from the back of the two-storey building and breaking through the roof, they reported.

It was considered a two-alarm fire, which means 10 to 13 emergency vehicles were dispatched to the scene.

The house was vacant, so no residents were injured in the fire, despite “extensive damages,” said district fire chief Joe Bennett of Toronto Fire Services.

One firefighter was sent to hospital with minor injuries.

The fire was reported to be knocked down by about 4:30 a.m.

The building appears to be half of a formerly semi-detached house, and sits beside an empty lot.

Charred results of the fire are visible through the front windows of the house, as well as in the attic and on the roof of the side of the house facing the lot.

However, an image taken from Google Street View, with a capture date of May 2019, shows similar — though not identical — fire damage, especially on the upper part of the side of the house.

TFS officials could not say yet whether the same building had been hit by fire more than once, or whether the other half of the structure had been taken out by fire.

Investigators are on the scene, looking into the cause of the fire. Their report may indicate whether the building has been targeted repeatedly by fire, officials said.

This story has been revised from the original on Nov. 18 to include additional information from TFS. 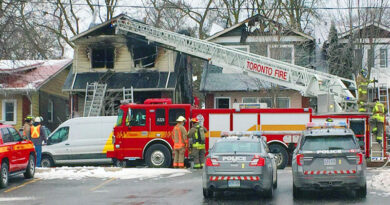 January 29, 2021 Eric McMillan Comments Off on Four dead, others injured in east-end fire