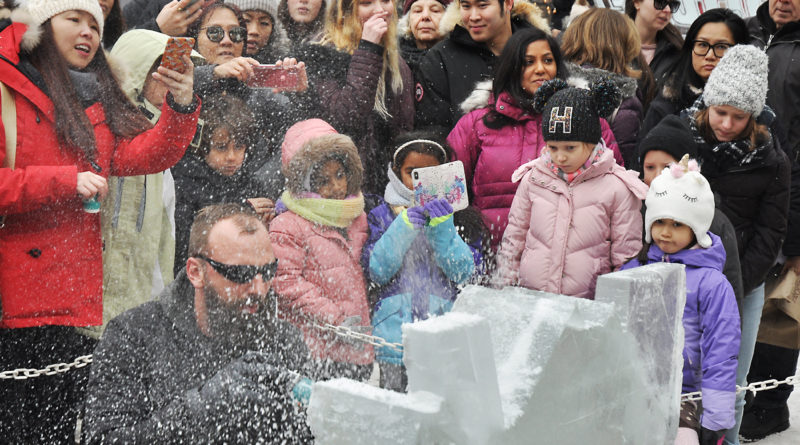 More than 40,000 attended the two-day Bloor-Yorkville Icefest in early February raising $9,000 for heart and stroke research.

Ice carvers are selected from across Ontario, said Rick Kaczmarek, director of marketing for the Bloor-Yorkville BIA. One carver came from upper Michigan state.

“We bring out the crowd from south Toronto and southern Ontario and they celebrate winter here in Yorkville every year,” Kaczmarek said at the festival.

The ice blocks, provided by Ice Culture don’t melt in mild weather because the blocks are made dense with a special formula to make them more durable and thicker “and can outlast some of the warmer temperatures, up to possibly 10 degrees,” Kaczmarek said.

Michael Houle, 52 of Kirkton, Ont., ventured into the ice-carving business after he realized his music work was keeping him from being home with his growing daughter.

For about 20 years Houle produced blues recordings as he toured with artists including BB King, Ray Charles and Aretha Franklin. An impressive list.

“My daughter got to age 11 and I noticed I wasn’t home enough,” Houle said in an in interview. It was Roger Hodgson of English rock group Supertramp who opened his eyes.

“I was kind of semi-retired for about four or five years, hung out with my daughter and basically stuck around the house, watched her go through high school and whatnot.”

Houle took work with Ice Culture driving a truck delivering ice blocks to ice fests. “One day they handed me a chain saw and asked me if I wanted to give carving a try. It’s 14 years later and here I am out touring around … carving ice.”

“I did watch the guys,” says Houle. “It’s like anything else you do. You want to learn how to play guitar, well you got to go through all the steps …. And practise, practise and practise makes perfect, obviously.”

What does a carver do when he makes a mistake, carving into the unforgiving hardness of ice — and crowds are watching? There’s a simple remedy, says Houle. “We got a little thing, you guys call it water, we call it glue, and you can actually fuse stuff right back on.”

Houle is off to Thunder Bay for his next ice festival. “That’s great weather up there for ice carving,” he says. 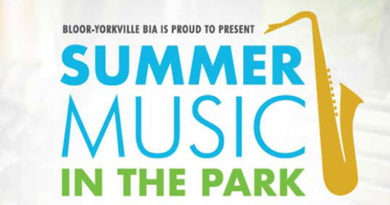 June 8: Music in the Park series begins in Yorkville Park