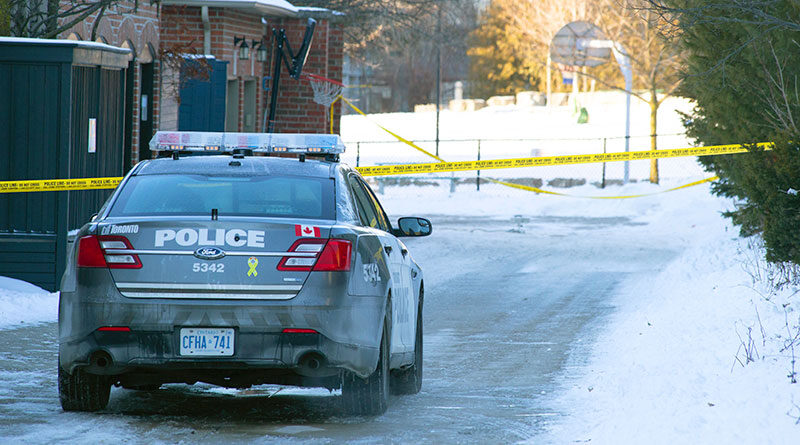 A shooting in a North Rosedale laneway yesterday evening has left one person dead and another in critical condition, police say.

After responding to calls for the sound of gunshots near Mathersfield Drive at about 8 p.m., officers found a man, 23, and woman, 27, suffering from multiple wounds.

CPR was performed on the man but he was pronounced dead on the scene, police said in a press release. Paramedics rushed the woman to hospital with life-threatening injuries.

Shell casings were found off Mathersfield in a laneway where police think the shooting occurred, Insp. Kathy Stephenson told media at the scene.

No description of suspects is available. Nor have police confirmed whether one or more shooters were involved.

The deceased has been identified as Sirac Tesfay of Toronto.

The police homicide unit is investigating and officers are canvassing the area for witnesses and video.

Police started tweeting about the shooting at 8:19 p.m., first indicating “a man lying on the ground” and “possibly 2 victims.” This was later updated to confirming the shooting, finding two victims and pronouncing the man dead.

A “large police presence” on the scene was reported, as homicide detectives took over the case.

Mathersfield is a residential street between Yonge Street and Mt. Pleasant Road, just south of the railways tracks that separate the neighbourhoods of Rosedale from Summerhill, although this area is often considered part of Summerhill. The streets are lined with large homes in this affluent area.

The laneway cordoned off by police runs behind houses on the northern loop of Mathersfield next to the railway barrier and close to the Pricefield Road playground, basketball court and playing field.

Investigators are asking people in the area to check their security cameras or dash cams for footage around the time of the shooting.

It is believed to the fourth homicide in Toronto so far this year.

This story has been updated late Jan. 30 with information, including the victim’s identity, released since the original publication.