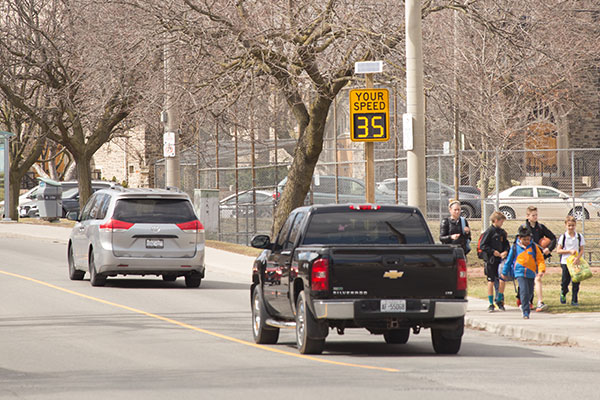 Walking through traffic-prone local neighbourhoods may be safer in the near future, if the City of Toronto has its way.

On March 29, city council approved a proposal asking the province to double speeding fines for residential streets, school zones, and near playgrounds and daycares.

“When it comes to fines for speeding, the province is the only one that has the authority to change anything, for any municipality in Ontario,” Roger Browne, traffic control and safety systems manager with the city of Toronto, says. “It’s one of those cases where people say, ‘Why doesn’t the city do this?’ And whether the city’s councillors support it or don’t… they need to make a pitch to the province to enable it.”

In addition to asking the province to increase speeding fines, the proposal, put forward by Ward 6 councillor Mark Grimes, requested a report that could be submitted to the Public Works and Infrastructure Committee, meaning it’s likely the city will soon conduct a feasibility study.

The study would analyze what would it cost to increase fines, Browne said. “What would be needed to facilitate such a change, and whether there would be implications from a traffic operations perspective… of course, [the proposal] is talking about changing the signs, not changing the speeds, so I don’t think there would be an operational impact in that regard.”

Ward 25 councillor Jaye Robinson says she supported the proposal and was especially glad to see her colleagues ask for an update on the report, which was originally requested in 2015.

Ward 16 councillor Josh Matlow echoed Robinson’s assessment, saying he was “very happy to support [the proposal] on behalf of our community,” and he hopes the province will do so as well.

“Speeding in our neighbourhoods, especially where it can impact seniors and our kids, is a priority concern for all of us,” he said. “As a city councillor, but even more importantly as a parent of a four-year-old daughter, I want our governments to use any and every tool possible to keep our kids safe … and one of the most effective ways to convince drivers who don’t seem to care about anybody else is convincing them to care about their own pocketbooks.”

Enforcement would have more impact on traffic: Burnside

Ward 26 Councillor Jon Burnside said that while increasing fines might help in some small way, the issue of fines pales in comparison to the present lack of enforcement.

“The unfortunate reality is that there are only two officers designated to traffic duty for the whole of 53 Division, which spans from Lawrence to Bloor, Bathurst to Leslie,” he says.

“I was happy to see the provincial announcement in the fall which paved the way to bring back photo radar, which should happen in the near future. Once it does, then the increased likelihood of getting caught, coupled with higher fines, should have a major impact on driver’s speeds.”

Ward 21 councillor Joe Mihevc, however, says he believes enforcement isn’t a key component of increasing neighbourhood road safety at all — and speeding fines are a very small part.

“Once you have to resort to enforcement you’re actually saying that the problem is unmanageable because of the way you’ve designed the road,” he said. “More important parts of the puzzle include looking at the problem on a case-by-case basis, asking where drivers are speeding and why, and then making road design changes to counter their speeding.”

Museums should be saved for cultural identity's sake

December 15, 2011 Town Crier staff Comments Off on Museums should be saved for cultural identity's sake