With a Canadian election less than eight months away, federal minister Karina Gould brought her warnings about expected cyber attacks to midtown Toronto on Sunday.

The Minister of Democratic Institutions spoke to a town hall meeting of about 100 people at Yorkminster Park Baptist Church on Yonge Street about the government’s plan for stopping digital interference in the election.

Much of the plan involves teaching the public how to deal with online misinformation, or practising “cyber hygiene,” as Toronto-St. Paul’s MP Carolyn Bennett, who organized the meeting, called it while introducing Gould.

Five days earlier in Ottawa, Gould had asked a House of Commons committee to consider imposing new rules on social media sites like Facebook and Twitter before the Oct. 21 federal election.

Gould told the Toronto meeting, she had previously thought of the internet and social media as equalizers, giving people a voice to stand up for democratic values.

“And then 2016 happened and the U.S. presidential election happened,” she said. “And we started to learn on a monthly and weekly basis about how these very tools that we were … holding up as these great equalizers and democratizers were being manipulated for undemocratic ends — most importantly by foreign actors — to create chaos and confusion.”

The government has launched a four-pillar plan to protect the elections and protect democracy, Gould said.

The first pillar of the plan involves educating the public.

“The best way to combat foreign interference, particularly in ways that we’re seeing it in regards to disinformation and fake news, is preparing citizens to know how to identify and to make discerning decisions with the information received online,” she said.

The government has announced $7 million in grants to be distributed through Heritage Canada to organizations running public-awareness campaigns to combat misinformation online leading up to the federal election in October.

Other pillars of the plan involve informing the public if interference is found during the election, providing advice to political parties on following secure procedures, and — the most difficult part, Gould said — engaging with social media platforms like Facebook, Twitter and YouTube in the lead-up to the election.

The social media giants seem to have taken some actions recently, saying they’ve taken down millions of fake accounts and accounts run by bots, foreign actors, or people impersonating others, but a lot more needs to be done, Gould said.

“We’re sort of tinkering around the edges,” Gould said and called for more fundamental changes.

The difficulty of that task was emphasized by McGill professor and author Taylor Owen, who spoke before Gould.

He outlined how the early euphoria about digital technologies as leading economic growth, empowering citizens and democratizing society has faded after about 20 years.

“I think we’re in a re-evaluation of that,” he said, pointing out the effect of digital technologies not just on the integrity of our democratic system, but on public health and on the concentration of wealth.

Most of these negative social and economic costs of digital technologies are actually embedded in their design, he said.

“It’s not just a case of bad actors using good tools,” Owen said. “It’s that the tools themselves were designed in a way that makes this kind of thing possible.”

We can be compassionate about refugees and uphold the law

October 9, 2018 Eric McMillan Comments Off on We can be compassionate about refugees and uphold the law

June 7, 2011 Town Crier staff Comments Off on Sadly, it does happen in Canada too 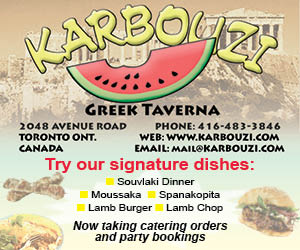