Bike Share Toronto, which has stations all over Beaches and Leslieville now, is letting would-be cyclists ride for free all day every Wednesday in September. 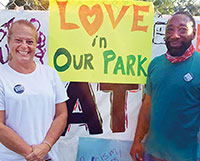 Love reigned in Dentonia Park on Saturday afternoon. Or, if not love, at least anti-hate. Colourful signs and banners festooned fences and trees for the rally to unite against racism and “reclaim the park.”

The event was a response to the alleged racist attack on a mixed race couple in the park two months earlier and, in the words of victim Mark Austin, to help fix a “broken” community. Get the full story and pictures. 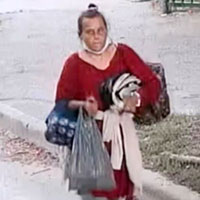 Images of a woman have been released by police today, about two weeks after a garage was allegedly set alight near Gerrard Street and Woodfield Road on the morning of Aug. 12.

A person seen leaving the scene before police arrived was caught on security cameras in the area, arson investigators say. No injuries were reported from the fire.

Police are looking for a woman in the images, described as about 55 to 65 years old, with brown hair in a bun, and wearing a long red shirt, grey pants and pink Crocs shoes. She had a light-coloured shirt tied around her waist and she was carrying several bags, the images show. 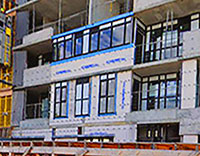 This is the best place to buy a condo in Toronto

If you’re looking for a condo in the East York area to move into, your economically best option may be to buy one. The real estate district encompassing East York and Danforth Village ranks highest in the latest report by Zoocasa, which looked at purchase prices versus rental costs.

The Beaches area was closer to the other end of the spectrum, the brokerage firm found, placing it in the better-to-rent condo category.

Read the story in Streeter News. 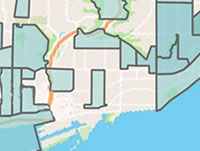 The Beach is free of new cases of COVID-19 and other east-end neighbourhoods are close behind, according to the city’s coronavirus map.

It shows zero to three confirmed or probable new cases recently for most neighbourhoods in the east end, as well as in midtown and central Toronto, for the past 21 days — all of August actually.

Check out your neighbourhood and how it compares to others in the Streeter article.

Thanks to the pandemic, the formerly tight condo rental market has loosened up, with more apartments available and prices dropping, according to a new report. In the Leslieville area (including Riverside and Little India), both listings and rentals are up substantially.

The good news for tenants though is that the availability of rental units is driving the average prices for condo apartments in the area downward.

Meanwhile in the Beaches area, listings are up, while leases are down — also forcing prices down somewhat.

They body of a man was found in a wooded area east of the Martin Goodman Trail, in the south end of Ashbridges Bay Park, on Aug. 14. He may have been there since Aug. 12, police say.

A photo of Acquilino Logwee Iko, 29, of Mississauga has been released in a bid to get more information from the public, according to investigators. Here’s what we know so far.

The south end Carlaw Avenue was shut down today after reports of a gas leak near Carlaw and Eastern Avenue. Police issued a “shelter in place” warning online at 11:14 a.m.

Enbridge Gas crews were on the scene.

On the I am a Leslievillian! Facebook group, a resident posted a video of a couple allegedly stealing furniture off his porch early this morning. See it here. 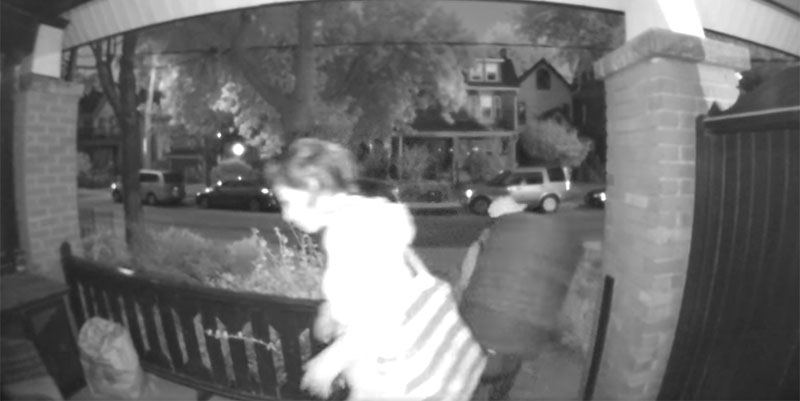 Alton Avenue in Leslieville and Mountjoy Avenue in the East Danforth area are among the seven locations across Toronto to get the stations to test the technology in the pilot project.

You won’t be able to buy your weed at Hobo, 20 Leslie St., any longer. Instead, you’ll be shopping at Dutch Love. Same store. Same location. New name.

Hobo Cannabis has changed its name for its dozen stores across Canada, including in Leslieville, after complaints were raised that “Hobo” is derogatory toward the homeless.

Hobo denied the charges but bowed to public pressure, choosing its new name of Dutch Love to honour Amsterdam, a leader in the legalization of marijuana.

East End Arts, in partnership with the city’s StreetARToronto Program, is calling on artists to submit proposals to participate in the revitalization of Danforth Avenue under the name Destination Danforth.

Destination Danforth includes a roll-out of public art over the next year, with four mural installations and twelve traffic signal boxes to be completed by October 2020.

Right now, the call is for four murals — one in each of four Business Improvement Areas: Broadview Danforth, GreekTown on the Danforth, Danforth Mosaic, and Danforth Village. The two themes to be addressed by submissions are Gratitude, Resilience, Hope and #EastEndLove.

The deadline for submissions is Aug. 26. Artists can get more details from East End Arts online.

A man was charged with sexual assault after returning to the scene of the alleged attack in the Woodbine Beach area, according to police.

On July at about 5 p.m., a 17-year-old girl sitting at the beach was allegedly approached by a man and sexually assaulted. He allegedly fled, but he was seen the next day at the same location and arrested, police say.

Police arrested a man, 41, after finding the body of a 37-year-old man in a semi-detached house on Greenwood Avenue, south of Millwood, yesterday.

Police issued a news release this morning, saying a man faces a charge of second-degree murder.

Dangerous medication may be floating around the east end. It was stolen in the area of Eastern Avenue and Woodfield Road between Dec. 5, 2019, and May 21, 2020, police reported early today. The 3,500 tablets of Contrave may be harmful, even fatal, if ingested, especially by children, they say. Anyone with information is asked to contact police at 416-808-5500.

An unspecified number of people were rescued yesterday evening after their inflated device floated far out into the lake, police reported on Twitter.

MARINE RESCUE:
Woodbine Beach
– More than 1 person on floatie
– Far out into lake
– They have been brought back to shore
– No one injured
^dh

East-end MPPs Rima Berns-McGown and Peter Tabuns are among 12 opposition MPPs asking Premier Doug Ford to give Toronto back the power to limit construction noise. This comes after city council made a similar request and after residents and residents’ associations have complained about noise keeping them awake.

Police have released a photo of a Toronto man wanted for offences committed in in the area of Main Street and Danforth Avenue.

A man allegedly broke into a residence and assaulted someone on July 9, followed by two further criminal offences by breaching his probation on July 23.

Joao Martins, 56, of Toronto, is wanted for break and enter, assault and four counts of failing to Comply with a probation order.

Child care centres say they are facing added expenses from the required health precautions during the pandemic at the same time as revenues are declining because fewer kids are retuning. Government assistance is needed if they are to stay in operation, some say.

Read the full story in Streeter.

The city has posted a commemoration to the victims of the Danforth shooting online late yesterday, including video of the private ceremony held earlier in Withrow Park. See it here.

Two years after the Danforth tragedy

Two years after two people were killed and 13 injured by a lone gunman on Danforth Avenue, survivors and families of the victims joined city representatives in commemoration in Withrow Park. Mayor Tory, Toronto-Danforth councillor Paul Fletcher, and shooting victim Danielle Kane were among those laying flowers beneath trees planted in memory of the two girl who lost their lives. See the whole story.

East-end housing prices up despite pandemic

In the first half of 2020, the average detached home in the real estate district including the Beaches, Woodbine and East Danforth is priced nearly 12 per cent higher than in the same period a year ago, according to a real estate report released yesterday.

East York prices are up about nine per cent, and the district including Riverdale and Leslieville are up nearly seven per cent.

Get the full story to see how we compare to other parts of Toronto.

Toronto Fire Services pulled a lifeless body out of a trench at a Jones Avenue house-building site yesterday morning. A man had been buried under debris, mud and concrete when the structure partially collapsed during construction. Get the full story.

No registration is required for these drop-in programs in spaces across the city. In Beaches-Leslieville, this includes Jimmie Simpson Park, Greenwood Park, Leslie Grove Park, Kew Gardens, Woodbine Beach Park and many other local locations.

There’s one already at 2265 Danforth Ave. and there’s supposed to be another one almost ready at 165 Main St. They’re among the first artworks in the city’s project hiring street artists to create murals thanking frontline workers during the pandemic. Read more about them.

In this hot, hot, hot weather, if you desperately need a place to cool off, head to one of the city’s emergency cooling centres in the east end: