After months of warnings from the Cabbagetown Youth Centre administration and local politicians that the centre would have to fold without new funding, Toronto city council came through. With a $161,000 grant, which keeps the doors open and keeps area parents happy.

The centre is still fundraising to support its after-four programs though. Read the good news.

Multiple stabbing at College and Manning

Police have no suspect descriptions yet after a man was stabbed and received serious injuries early this morning. Police say the man was involved in an altercation and was stabbed multiple times near College Street and Manning Avenue area at about 3:10 a.m. on Feb. 22.

Police are seeking the public’s assistance in identifying suspects in an aggravated assault investigation. They are asking residents to check home security cameras or video doorbell footage for activity that would assist the investigation.

Subway service will be suspended on the Yonge Street line between Bloor-Yonge and Osgoode stations on Saturday, Feb. 22, the TTC says. The shutdown is needed for the installation of  automatic train control signaling system.

Shuttle buses will be operating in the area of the closed line. See the TTC online for more information.

No crime in human remains found buried in Annex yard

Police have closed the case of the buried bones. The remains found in the backyard of 410 Brunswick Ave. were from a “human specimen” used to teach new doctors, according to police. The bones were discovered to be a “teaching aid” that had been disposed of in the 1940s by a doctor.

“There was no crime committed,” a police spokesperson said. See the full story in Streeter news. 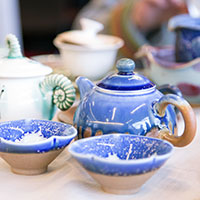 The tea is on at Reference Library

The kettle is on and the Toronto Tea Festival has started at the Toronto Reference Library.

See photographer Alexei Malakhov’s report on this event that draws tea fans from far and wide, as he learns what makes tea so important to so many people.

The acclaimed eatery that served Taiwanese food at the corner of Parliament and Carlton streets was shut down recently after falling into arrears with its rent. It also
failed a health inspection in December. Here’s what we know about it.

Toronto Police are holding a public consultation at 519 Community Centre, 519 Church St., this evening as part of its gender diversity and trans inclusion project. The public are invited to attend the forum from 6 p.m. to 8 p.m. Doors open and refreshments are available from 5:30 p.m. The event is not open to the media.

Shootings may have increased dramatically in the city last year — especially downtown and in the northwest suburbs — but they are still relatively rare in Central Toronto, judging by year-end data from the police. And while shootings and shooting victims are up across Toronto, the number of fatalities and homicides is actually down. See the full story.

Dark smoke blanketed the area around the Bloor-Sherbourne intersection yesterday as a fire broke out near the bridge connecting Rosedale to downtown. A bank at the corner was scarred by the soot, as firefighters searched for the source, eventually locating it under the bridge.

See the main article to find out more about this, including where the cameras have been set up in Central Toronto neighbourhoods.

Finch commuters left out in the cold