The Ontario Municipal Board has no place in the planning of Toronto’s neighbourhoods, says Kristyn Wong-Tam.

The rookie Ward 27 councillor has put forth an ambitious motion asking the province to exempt Toronto from the decisions of the provincial appeals body. She is also calling on Queen’s Park to go a step further and abolish the quasi-judicial board completely.

Severing ties with the Ontario Municipal Board, which hears zoning and official plan amendment appeals, would leave decision-making where it should be — in the hands of city planners and elected officials, said Wong-Tam.

“We go through working groups and process at the local ward level, so by the time an application moves its way through to council, it’s gone through a year of consideration and review from all the different departments,” she said.

If the province isn’t willing to eliminate the board completely, she suggests a large urban centre like Toronto be exempt under the Planning Act.

Wong-Tam’s motion comes at a time when Mississauga recently unanimously voted in favour of asking the Minister of Municipal Affairs and Housing to remove the Ontario Municipal Board.

Though critics say regardless of the board, planning decisions can still end up being costly and time-consuming matters in court, Wong-Tam points out the OMB doesn’t eliminate that possibility as the body’s decisions can be appealed in court.

More disconcerting, Wong-Tam says, are the rules surrounding appeals, which create a disincentive for community members fighting an application.

“If it’s a crapshoot, they believe they can win at the OMB, why not appeal as quickly as possible,” she said.

Despite a victory for her ward at the OMB in 2009, Ward 30 councillor Paula Fletcher is supporting calls to abolish the board. She says the OMB is too development-friendly and undermines land-use planning at the local level.

“Decisions that are being made locally are getting overturned,” she said. “The person who may be sitting on that appeal may be from anywhere in Ontario, it might be very hard for them to really understand the complexities or the difficulties around a large, dense application,” she said.

In 2009, big-box retail developer SmartCentres took the city to the OMB in the hopes of having the lands on Eastern Avenue designated commercial. The board upheld the city’s official plan designating the lands as employment.

“Thankfully, the OMB upheld that, but that’s the only time the OMB’s ever upheld one of these big-box appeals from the city,” Fletcher said. “We were just lucky in that case, I think.”

Ryerson urban planning professor Mitchell Kosny says he isn’t convinced severing ties from the Ontario Municipal Board is the way to go.

While the rules on governing appeals perhaps need reforming, Kosny says the board still plays an important role in bigger picture planning for the province.

“I’m just not prepared to throw those kinds of decisions in front of (councillors) elected by wards, elected to pretty much represent the ward,” Kosny said. “I think planning is bigger than that.”

In response to the motion, Joe Vacarro, acting director at the Building, Industry and Land Development association questioned what would replace the Ontario Municipal Board’s role should the city be exempt from its rule.

“Regardless of where you stand on an application, whether you’re a developer, ratepayer, city, there needs to be an adjudicating body,” he said.

However, included in Wong-Tam’s motion is the continuation of the city’s process in establishing a local appeals body for planning decisions.

The motion was to be debated at a Nov. 8 meeting of the planning and growth committee.

Bannockburn hearing held over to 2015

November 14, 2014 Shawn Star Comments Off on Bannockburn hearing held over to 2015 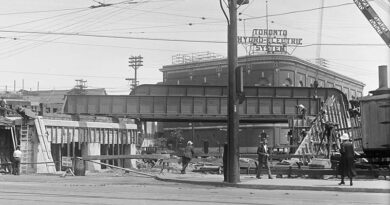 May 12, 2014 Town Crier staff Comments Off on Heathview apartments ready