As anyone who rides the subway knows, it’s already overcrowded.

During rush hours at midtown stations like Eglinton, Davisville, St. Clair and Summerhill, it’s common to wait for two or three trains before boarding, and once on you’re crammed in like a sardine.

The overcrowding is most critical at Bloor-Yonge station, with another 45 percent increase in users expected over the next 20 years. Even with signal improvements and the new larger trains we can’t keep ahead of this growth with the current network.

The Relief Subway Line is the rapid transit project that could most improve Toronto’s transit network. It would provide an alternative to the congested Yonge-University-Spadina and Bloor-Danforth lines, curb gridlock on our city’s streets and provide a better connection between North York, Scarborough and downtown.

It is not only justifiable from a ridership perspective but will very shortly become necessary if we are to avoid crippling overcrowding elsewhere on the subway system.

While the precise route must be evidence-based and designed by our planners and engineers, transit experts agree that the first priority is to build a line from roughly Pape and Danforth to downtown to relieve pressure on Bloor-Yonge station (Phase 1), the pinch-point in our subway system. Commuting has already become challenging for many as Bloor-Yonge station is heavily overcrowded during rush hours. Then, in Phase 2 the Relief Subway Line would extend north to Eglinton or Sheppard and north-west to the High Park area.

Both phases should be completed, but projected ridership numbers and the coming Eglinton Crosstown suggest that the northern section should become a higher priority.

It is vital that work on the environmental assessment begin immediately to ensure that residents won’t wait another generation for the line to be completed.

Provincial transit agency Metrolinx has identified the Relief Subway Line as a priority for its next phase of projects, but to be started within 15 years. I’m advocating that the work begin now. 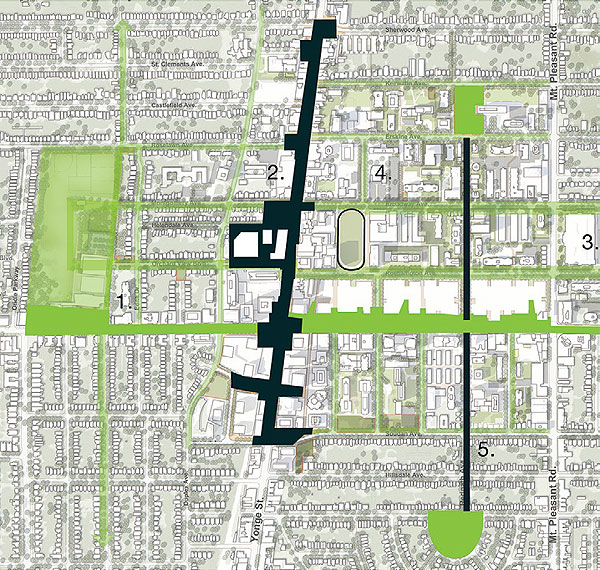 Thumbs up to realm greening

September 5, 2014 Shawn Star Comments Off on Thumbs up to realm greening

All aboard the new TTC subway cars!

June 7, 2011 Town Crier staff Comments Off on All aboard the new TTC subway cars!