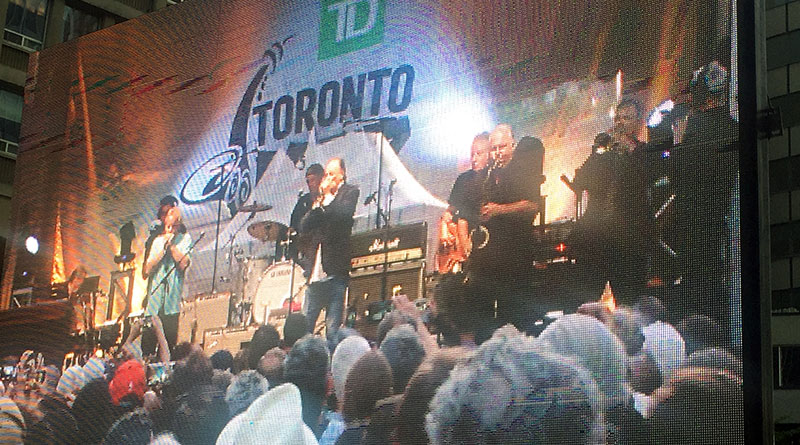 Eric McMillan/Streeter ON THE BIG SCREEN: For many of the thousands who came to see Downchild Blues Band on Saturday evening, the best view was from near the back of the crowd on the big screen.
Edition: Central Toronto
*FEATURED NEWS
June 23, 2019October 16, 2019 Eric McMillan Bloor Street, blues, Dan Ackroyd, Downchild Blues Band, Paul Shaffer, TD Toronto Jazz Festival

They flipped, they flew, but they never flopped. Not for a moment.

The jump blues, the happy blues that set feet tapping, couples dancing and everyone applauding on the shut-down, east-west main drag of central Toronto.

All those old songs from the early rock, R&B days, in the Big Joe Turner “Shake, Rattle and Role” mode. Their own “I’ve Got Everything I Need (Almost)” and “When a Mississippi Woman Meets a Mississauga Man.” Closing (before the encore) with their biggest hit, “Flip, Flop and Fly.”

The uptempo numbers were interspersed with the odd sad blues and other numbers to show off the guitar work of band founder Donnie Walsh and guests like blues-rocker David Wilcox, Louisiana bluesman Kenny Neal, Finnish blues sensation Erja Lyytinen and others on keyboards and harmonica — all of whom seemed to be having the time of their lives. (“Let’s all move to Finland,” someone on stage said after Lyytinen’s first appearance.)

It was difficult to get an accurate count of the crowd, since it was packed in tightly within hailing distance of the stage near Avenue Road and was strung out further east along Bloor where fans had to be content with watching the performance on a big screen — which, to tell the truth, actually provided the best perspective on the stage show.

Others watched from windows and lined terraces. Many had to listen from behind the stage, where their compensation was that they got to see the guest stars and VIPs hobnobbing in the railed-off area.

The free event was, after all, a huge block party. The celebratory atmosphere was heightened by homegrown Hollywood star and blues aficionado Dan Ackroyd, who delivered his Toronto-boosting, hyperbolic introductions from behind a backstage screen. Late in the show he and TV bandleader Paul Shaffer joined the group upfront along for several fun numbers, including the Blues Brothers signature tune “Soul Man.”

Ackroyd recalled he and John Belushi had formed the original Blues Brothers in emulation of the original Downchild band.

The Blues Brother, who looks more like an old blues man himself all the time, shared vocal and harmonica lines with Downchild’s ebullient front man Chuck Jackson and adding his famed little shuffling dance, showing he hasn’t lost a step since his more svelte days.

At the seeming end of show after the band and all its guests had romped through the finale, after the stage had emptied, and the remaining crowd shouted for more, Walsh returned to stage solo and quieted them with some electrifying guitar. He was eventually joined by vocalist Jackson and then other band members as they filtered on stage until together, as the band alone, they finished one more rousing number to say goodbye and thanks to Toronto.

“We’ll see you in 25 years,” Jackson quipped to applause.

(Full disclosure: This writer first saw Downchild in the early 1970s at a concert at Hart House, just a couple of blocks from this latest gig, and has been a fan ever since.) 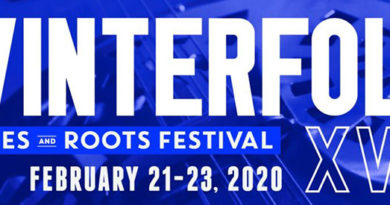 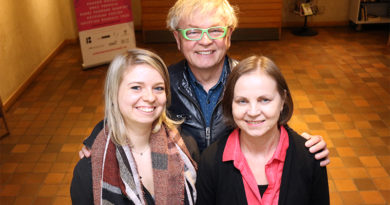 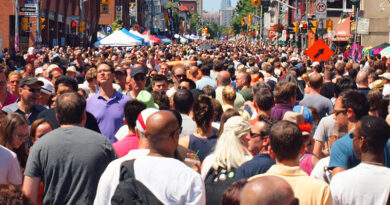