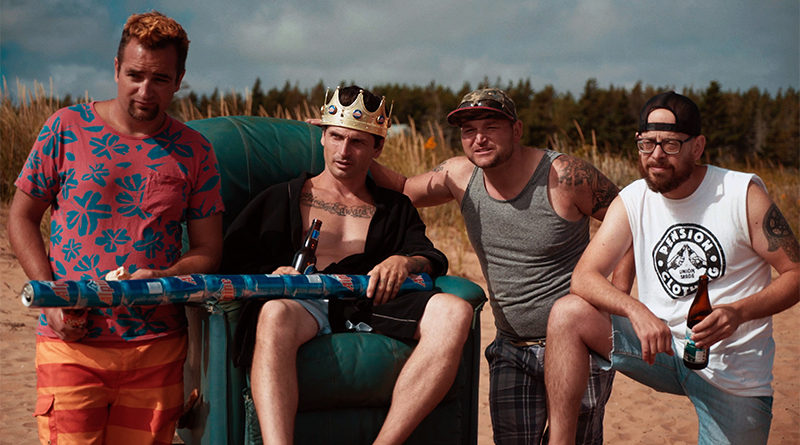 When a movie has a character named Turkey Tits, you know it’s got to be to be an off-the-wall comedy about the shenanigans of Prince Edward Islanders.

Pogey Beach, launched on iTunes Jan. 22, is the brainchild of Seaton Villager Jeremy Larter, as well as Annex resident Geoff Read and Humewood resident Robbie Moses — the same trio who spawned the Youtube series Just Passing Through, covered by Streeter three years ago.

Although the characters of that earlier production, Terry and Parnell Gallant, are on the back burner these days, their favourite soap opera from the web series has been adapted into a full-length film.

Pogey Beach has been in the works for more than two years, and the trio even alluded to it when interviewed by Streeter in 2016. After a month-long Kickstarter campaign that raised $55,000, three weeks of writing and shooting and completion funds from Telefilm Canada, Larter and team have brought summer fun to frosty Ontario.

The time constraints for the fundraising campaign provided a steady schedule for Larter, who spoke four days before the launch of their new film.

“You have to be on it every day. Pushing it out there. Making videos, rewards, drum up press,” he said of the month-long campaign. “It was down to the wire. I think we crossed the finish line a couple days before the deadline.”

After their goal was reached, they set about writing for three-weeks and then off to Prince Edward Island to shoot the Gidget-inspired beach party.

“The movie is a spoof of the 1960s California beach movies,” Larter said. “Those movies, the characters have ridiculous nicknames. We wanted to do an homage to the Gidget films.”

It’s a little more R-rated however, as protagonist Gary Gallant tries to have a good time with his friends, all while avoiding the pogey narcs.

Though Terry and Parnell are on hiatus, the actors who played them have returned as well. Dennis Trainor, who played the foul-mouthed womanizer Parnell, plays Winslow Lockwood, the over-protective dad. Moses, who played Terry Gallant takes the role of the aforementioned Turkey Tits, a character named for a bar owner’s acquaintance.

“Turkey Tits was a name that came from a guy who owns a bar in P.E.I. and he had a friend called Turkey Tits,” Larter recalls. “He’s supported our show over the years and he said, ‘If you’re able to make a movie, please call one of the characters Turkey Tits.’”

There are equally absurd nicknames for characters in the movie, which is all good fun, especially for the fans of Just Passing Through, which has amassed over 300,000 views on Youtube.

“We have loyal fans that have been with us through the years, so this film was made because of them,” Larter says.

It’s all in a day’s work for the government.