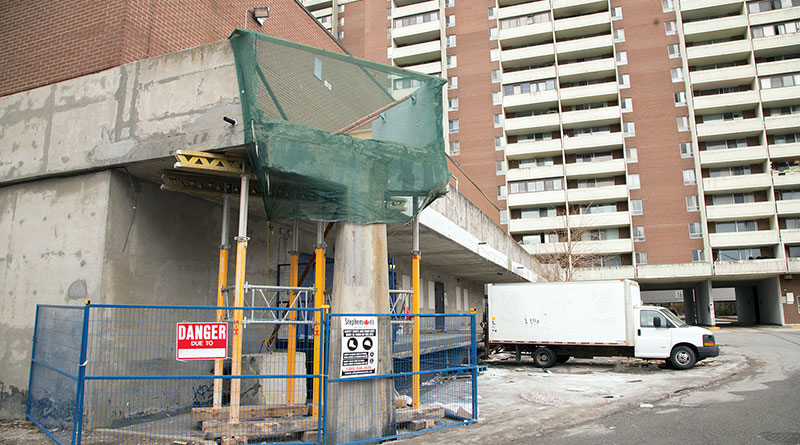 Parents, school staff and students are asking why repairs have not started four months after a pedestrian bridge collapsed outside Crescent Town Elementary School.

A lone concrete pillar is all that remains of what was an essential pedestrian bridge that connected a condominium complex and plaza with the school. Nobody was injured on the morning of Nov. 17 when a section of the bridge fell onto the driveway below.

Parents and students used the bridge daily to get to school. As a result of the collapse, they have to access the school from the much busier Massey Square Road below the bridge.

As a lesson in letter writing, Mariela Sirizzotti’s Grade 3 class recently wrote letters to both Pinedale Properties and Mayor John Tory’s office in hopes of getting some answers on when the bridge would be fixed. Six students wrote to the mayor and the rest of the class wrote to Pinedale CEO Alexander Grossman.

In one letter, a student named Sams reminded the mayor he said he would make inquiries into how the bridge got to the state it did. He asked, “So Mr. Tory. What did you find out?”

Other students demanded to know why repairs weren’t already done, since the TDSB identified problems years ago but were unable to convince Pinedale engineers the work needed to be done.

The mayor’s office got back to the students recently and said Tory has a follow-up call set up with the property owner. He also has a letter drafted to be sent to the students in the coming days that could provide them with an update.

School principal Harpreet Ghuman said he would like to see more communication to the residents, the families, and the school about a timeline for when things could happen.

“Not only is it unsafe, it’s so congested and the probability of someone getting hurt or an injury of some sort is so high,” he said.

Ghuman would like to see a crossing guard or safety personnel watch the area. He added the school would help, but there aren’t enough people to do it.

The property that the bridge sat on is jointly owned by the Toronto District School Board and Pinedale Properties, which manages the condominiums in the area. The two sides have been working together since the end of January to find a solution. “Once all of that has been finalized, we can then provide an approximate timeline,” the TDSB said in a statement.

The area that the bridge bypasses is very active and includes Wheel-Trans services, garbage pick-ups, and deliveries for the stores in the connecting plaza. The road going in is one lane and the sidewalks are not completely clear of ice and snow, leading to people walking on the road. The only other access that connects the plaza and the school, is a steep ramp that can be risky to traverse, especially in winter.

The issue of what to do with the collapsed bridge was brought before city council in December by Ward 19 councillor Brad Bradford and seconded by Mayor John Tory. It included a move to conduct an internal review using audit resources of actions taken by city staff regarding the bridge and to work with a city solicitor to find out the cost of a third-party investigation into what led to the collapse.

Bradford doesn’t just want to get this particular situation sorted out. He wants to make sure it doesn’t happen anywhere else.

“Even though the Crescent Town Bridge collapsed before I took office, I wasted no time arriving on the scene to see what I could do to help,” he said in a statement to the Toronto Observer. “This led to my first act as Councillor, writing a motion to audit privately held bridges across the City of Toronto so these situations won’t happen again.

He said he would work with the community, TDSB, and Pinedale to help those impacted by the bridge collapse.

At the Dec. 13 session of city council, a signed petition with 55 names was presented on behalf of the parents outlining how dangerous it is for the bridge to be out and expressing their concern to council about the safety of their children and for the rest of the apartment buildings under Pinedale’s care. They demanded a public investigation into what happened and to know who is responsible.