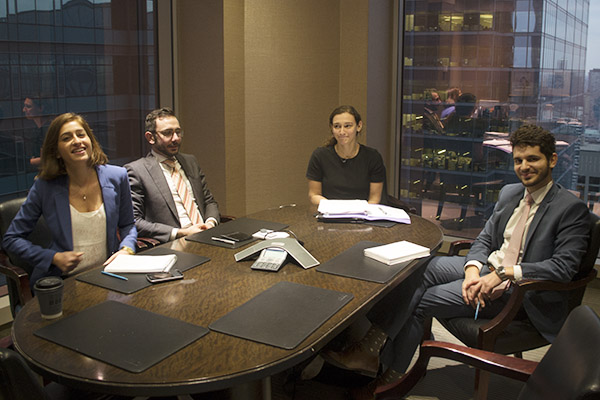 Together they have raised enough money to bring a Syrian family to Toronto.

But Elisabeth Lister, co-chair of  the Leaside United’s refugee resettlement committee, says the group was motivated to do more than just raise money. “They also wanted to be involved in an outreach endeavour.”

Naveen Hassan, a junior lawyer with the firm, says it took a while for the group to figure out exactly how to get involved.

“Raising money, we do that for a lot of initiatives and causes in the community … but this is a bit different,” Hassan says. “There was a lot of interest in the firm having a more active role in responding to the crisis. That is how we landed on the idea of the Toronto office sponsoring a family.”

Before the church could agree to partner with the BLG, it needed assurance the busy lawyers would be available to help the family integrate and learn how to navigate the city, said co-chair Bob Lister.

“One guarantee we needed … was will they have people available in the day time?” Bob Lister says. “When people come, the start-up commitment in time, especially in the day is significant. To get them started in school, set up in bank, how to shop, get to the doctors, go on the subway … Without the people available the other stuff [money] doesn’t really matter.”

Tim Buckley, a partner in the firm, says the number of people involved  grew from a handful to between 20 and 25 people. All of which are heavily devoted to the cause.

“These are 20 people that we went to and said, when the family arrives we’re going to have to take days off work, are you able to take holiday days to work with the family? They said, of course … we’ll take whatever days are necessary. This is very, very committed group of people.”

Pierre Permingeat, a junior lawyer who helped start the sponsorship group, says he underestimated the amount of resources a firm the size of BLG could offer.

“I didn’t realize as a national firm we had a lot of resources to be offered,” Permingeat said. “On a human level I think a lot of people were touched with what was happening. And then we realized we really could make a difference. I think it was an easy decision for us to offer the services we could provide.”

Hassan says the group at Leaside United Church made it easy to get involved as it’s “enthusiastic and very open” to helping other groups. “Really for us it was an easy decision to partner up with them.”

The group of young people from BLG — the core group is all under 30 — didn’t just stop there though. They have spearheaded a national project in BLG offices across the country. Offices in Montreal, Ottawa, Calgary and Vancouver are all now preparing to sponsor a family.

Local residents invite you to Supper With Syria

October 26, 2015 Eric Emin Wood Comments Off on Local residents invite you to Supper With Syria