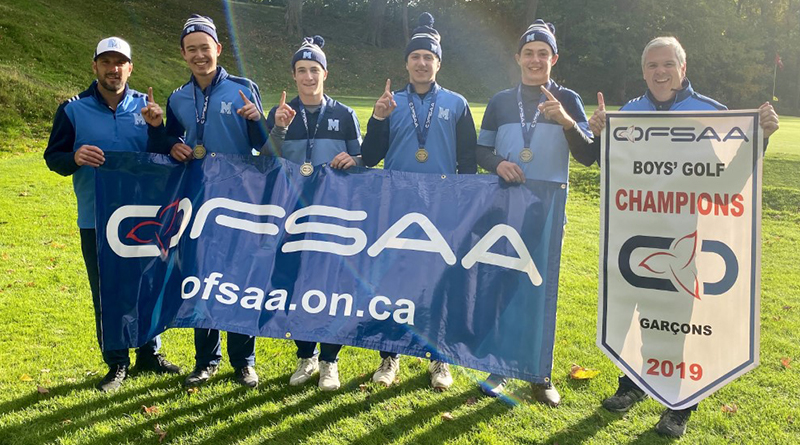 Grade 10 Luca Cimoroni and Grade 11s Domenic De Luca, Oscar Feschuk and Ben Hirasawa all shot under 80 at the Kingsville Golf and Country Club on Oct. 16-17 to earn themselves a gold medal.

The squad had a three-shot lead after Day One but that quickly evaporated along with the rain that cleared up on Day Two. Scoring was based on taking the top three scores of the four-player roster.

Scores on holes 15 through 18 would prove to be the most critical part of the tournament as they swapped leads with St. Mary’s Catholic Secondary School in Cobourg, coach Paul Ruta recalled in November phone call.

St. Mike’s Blue Eagles found a way to lead the tournament in par-3 scoring, which worked to their advantage.

Ruta travelled from hole to hole trying to find out the results as live scoring was cut after the 16th hole.

Their top golfer on paper, Oscar Feschuk, had a rough 16th hole, double-bogeying after spraying his tee shot.

With the quick turnaround, it didn’t matter what he hit on 18, as Cimoroni, De Luca and Hirasawa would all par the final hole to help seal the victory.

Their results through the two days, on a Par 72 course, were Cimoroni 78/76, De Luca 77/79, Feschuk 75/79 and Hirasawa 80/76. All four of them play professionally outside of school, including Feschuk, the son of Toronto Star sports reporter, Dave Feschuk.

But making their mark for SMCS was even sweeter.

“It’s pretty cool because there isn’t a lot of stuff in athletics that St. Mike’s hasn’t done,” the 16-year-old Feschuk said. “To do something for the first time is pretty cool and pretty special.

“I didn’t play my best, but in the first round, I played really well. I was just about the team for the week. I didn’t really care about my individual results.”

As the adage goes, teamwork makes the dream work, and building the team’s confidence was part of Ruta’s role this season.

“For us, it’s about building and breeding confidence into these guys and ensuring they understand the course,” he said. “At the end of the day, we don’t do too much with their swing.”

The only member of the team that helped qualify for OFSAA through the CISAA championship was Owen Gauder. CISAA allows for a five-member team, using the top four scores. Unfortunately, OFSAA only allows four.

“We had to go to an internal playoff with him and Hirasawa to see who was going to play at OFSAA,” Ruta said, adding Eagle’s Nest was the location of the very close match that lasted 19 holes.

All four of the OFSAA team members will be back in 2020, and they will most definitely be looking to repeat.

Until then, St. Mike’s next big tournament will be a berth in the High School Invitational at Pinehurst in North Carolina. This year marks the first time a Canadian school has been invited. 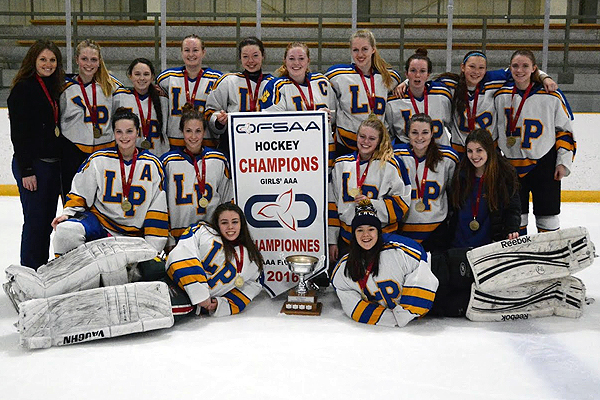 Lawrence Park’s girls hockey the best in the province

March 22, 2016 Brian Baker Comments Off on Lawrence Park’s girls hockey the best in the province