An early morning fire in Leaside destroyed a family-run laundry business that has been serving the community for over two decades.

Around 3 a.m. on Oct. 14 a two-alarm blaze broke out at Leaside Cleaners, located on Bayview Avenue, just south of Millwood Road.

According to district fire chief Stephan Powell, from the time fire crews got the call, it took about an hour to control the blaze. Power and gas lines were also shut off, which affected a few neighbouring businesses and second-floor residences.

“It appears the fire started in the basement,” Powell said, adding there were no flames to be found on the first or second floor when firefighters arrived, but heavy smoke was coming from below.

No one was hurt in the blaze, which according to Toronto Fire was likely caused by an electrical failure in the basement, though residents above the stores were evacuated from the building.

Mimi Rassias, who with her husband Phillip have owned and operated Leaside Cleaners for 22 years, said she was alerted to the fire by a friend who lives adjacent to the store.

Standing outside the building with half a dozen relatives only hours after the blaze, Rassias said it had been an emotional morning.

“At the beginning I came and I was crying, I was screaming, I was devastated,” she said. “I thought I was losing everything. Now, I feel a bit better.”

Also heavily damaged by the fire was Bayview Hairstylists, a hair salon above the laundry store that is owned and operated by Rassias’s sister, Rita Valasiadis and the Flower Nook next door to the cleaners.

Rassias said she appreciated the outpouring of support from the local community.

“All the neighbours here, all the stores they ask if there’s anything I need. They all came and offered their support,” she said. “I cannot believe it.”

Just two doors down from the cleaners, McSorley’s Saloon and Grill remained without power into the early afternoon.

Hanlon, who’s been in the area 20 years, said he felt horrible for the Rassias family.

“(They have) a very large rebuild, a long road back,” he said. “My heart goes out to them.”

Reverend Beth Benson from St. Cuthbert’s Anglican Church said she was having lunch at a nearby restaurant when she saw the crowds outside the building. She came over to offer Mimi a hug and see if there’s anything she could do.

“Leaside still has the important qualities of a village,” she said. “People really, really care about each other here.”

Contacted by phone in late October, Rassias said it would likely be a year before they are able to open again.

She said she and her family have started to rebuild slowly, assessing the damage and working with insurance adjusters.

“A lot of work has to be done to the building,” she said.

Rassias also said the owners of Flower Nook were looking for a temporary space in which to operate their business. 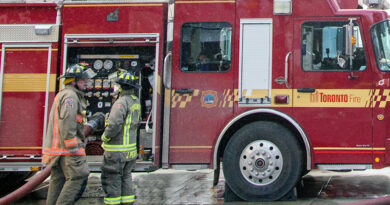