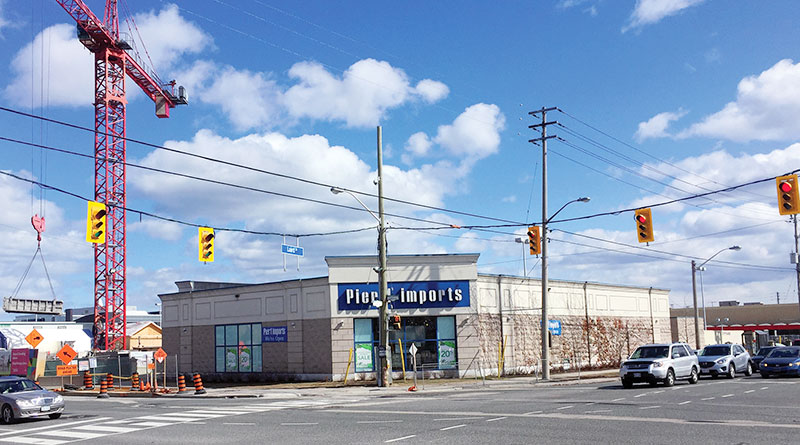 It may be overlooked amid all the construction taking place on Eglinton Avenue for the Crosstown LRT stations. But there’s another potentially massive development waiting in the wings at the thoroughfare’s intersection with Laird Drive.

The entire block southeast of the corner south to Vanderhoof Avenue is the subject of a proposal, made in August 2016 by Goodmans LLP, calling for seven buildings ranging from six to 34-storeys. The project would include retail space, residential uses, a new public park, community space  and a network of public and private streets — in short, practically creating a small town within Leaside.

Canadian Tire and Pier 1 Imports are two of the many existing businesses in the area that would be affected by the redevelopment as proposed two years ago.

For the moment though future of 815–845 Eglinton Ave. E. is being redesigned for Phase III of the Laird in Focus planning study.

Eglinton Avenue has identified an intensification corridor in Metrolinx’s Regional Transportation Plan. Laird is one of six focus areas with large parcels of land. Along with Don Mills and the Golden Mile, as well as mobility hubs Mount Dennis and Kennedy, are designated for additional study and public consultation.

The third phase of the study is to involve area residents and could include such features as height restrictions or amenity guidelines.

For the Leaside Property Owners’ Association, there is hope for mixed-use and specifically residential units that take into consideration an aging population.

In an April phone call, association co-president Carol Burtin Fripp acknowledged there is a glut of luxury condos of the pied-à-terre variety.

“We have had meetings with RioCan in the hopes that if there was residential there, that it would be rental and it would be sensitive to the demand for seniors housing,” she said.

Her association colleague, co-president Geoff Kettel felt the LPOA didn’t fight enough against a proposal at Brentcliffe which was capped at 28-storeys.

One of the draws, Kettel surmised, was the large industrial parcels of land that are ripe for the developer’s picking.

“You’ve got a large park like Yonge and Lawrence. You’re not going to be putting density in there,” he said. “The city is trying to look at on a systemic basis.”

Kettel added he is attending an Advisory Committee meeting on April 11.

“I don’t know what they’re going to come back with. They were talking about that as a greenway with bike lanes,” he said.

A public meeting is expected in the near future.

A call for reinforcements to save ‘Keewatin’s Wall’ 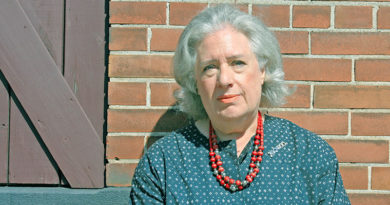