Shrapnel may not evoke the most romantic image, but how about shrapnel smiles dancing in the debris?

North York slam poet Henrick (Shoolie) Sales uses his words to turn difficult subjects into art, such as in his piece “Love, War and Peace”, about forlorn love in a war zone.

The 19-year-old spoken word artist, who lives near Finch Avenue and Leslie Street, presents topics to which youth can relate, such as body image and bullying in a creative way.

“Most of the stuff I write about is ugly,” he said. “But I try to turn it into something beautiful with my poetry.”

Sales, who got the nickname Shoolie while growing up in the Philippines, first stumbled upon slam poetry while surfing the net.

Soon thereafter, he attended the Toronto Poetry Slam and it wasn’t long before he himself was performing at Toronto events such as Up From the Roots and the Bam! Toronto Youth Slam, where he won Bam! Slam Champion for 2010-2011.

“I started slamming everywhere I could,” said Sales enthusiastically. “I even go to Burlington sometimes because they have a slam scene there.”

He recently traveled with his collective, The Messengers, to perform at Brave New Voices, an event in San Francisco.

“It’s the biggest youth slam in the U.S.,” Sales said. “We were the very first team that was sent from Toronto … I was really honoured to be there.”

He was also one of the poets representing Toronto at the 2011 Canadian Festival of Spoken Word in October.

Previously into creative writing, Sales said he was attracted to the high-energy performances that define slam poetry.

He says a careful balance is needed for the ideal slam.

“But if you’re not engaging the audience, people can’t connect to your poetry and some of the meaning is lost.”

However, he also warns over performing can come across as artificial.

He said slam poetry is also distinguished from standard spoken word because at its heart, it’s about winning.

“At a slam it’s competition,” he said. “As much as you just want to perform, at the back of your head there’s that wanting to win.”

Sales has been slamming seriously for almost two years now and when he’s not busy writing or performing, he attends Humber College for culinary arts. He said in the future he is considering pursuing social work because he has a passion for reaching out to youth.

“That way I can combine helping young people and poetry,” he said.

And while engaging youth, winning competitions and the rush of being on stage are all inspirations for him getting into spoken word, Sales said his favourite part is simply sharing what’s on his mind.

“It’s really about sharing a story, that’s what I really like,” he said. “Telling a story that people can relate to, I think that’s what spoken word is all about.” 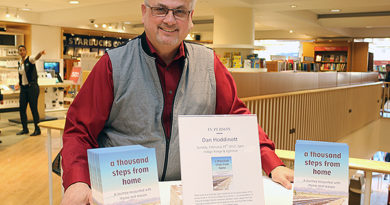 August 16, 2011 Town Crier staff Comments Off on Chasing a dream