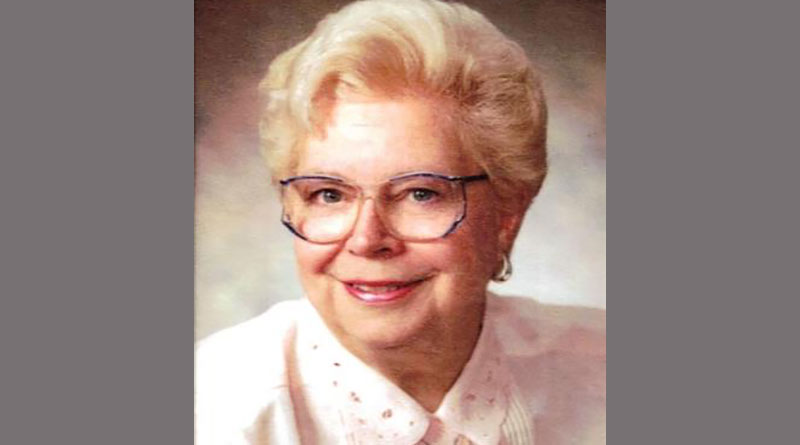 East York lost one of its most prominent citizens with the death of Edna Beange, 98.

A former councillor and activist involved in founding, running and helping many local causes, Beange died on Jan. 7 after having been under palliative care for more than six months.

Beange was eulogized in the House of Commons on Jan. 30 as a “force of nature,” a remarkable woman and activist, “making a difference in our community right until the day she died.”

Starting with her election in 1976, Beange represented what was then called Ward 4, taking in Leaside, on the East York council for three terms until retiring from politics in 1988.

Before, during and after her run on council, she was active in local affairs, serving on or chairing more than 20 organizations, committees and boards over five decades. Among them were Meals on Wheels, Sharing, East York Community Care, the Toronto Council on Aging, East Metro Youth Services, the Canadian Mental Health Association, the Children’s Aid Society, Stay at Home in Leaside, and the Leaside Garden Society.

She was the first woman on the Toronto East General Hospital Board of Governors and in 1999 was appointed honorary director for outstanding service to the board.

In 1994, she was the first recipient of the Agnes Macphail Award for furthering women’s rights, senior’s fairness and access to housing, health care and education.

In 2001, she was presented the Governor Generals’ Caring Canadian award from the Lieutenant Governor of Ontario.

“An East York icon, a long-time city councillor, an inspiring activist, Edna followed in the tradition of strong Leaside women like Agnes Macphail making a difference in our community right until the day she died,” Oliphant said.

“Edna was a force of nature. To her son Don and daughter Jean I offer, not condolences, but thanks for sharing this remarkable woman with Toronto, Ontario and Canada, She will never be forgotten.”

She was often featured in the pages of Streeter (formerly Town Crier)  over the years, dating back to the 1980s and as recently as last March when she attended the Agnes Macphail Awards as a past winner.

Publisher Eric McMillan recalls his last encounter with her about a year before that. “I was overseeing distribution of our paper to the garden apartments on Bayview Avenue, when she came out and berated me — very sweetly but firmly — to make sure we got the paper to all her neighbours on the street,” he says.

“I hadn’t met her personally since covering her exploits when I was a young reporter, but I could see in her advanced years she hadn’t lost any of her fire and concern for the community.”

Edna Longman was born in Saskatchewan in 1920, an only child who at age six lost her mother. She and her father later moved to Vancouver where she eventually met her future husband, Donald Beange.

They moved to Leaside to marry and raise a family. Her husband operated the local business G&C Cartage, while she worked as a homemaker and became active in the community.

After Donald died in 1973, she oversaw the winding down of his business and then got involved in local politics.

Daughter-in-law Carolynn Beange says Edna was “always curious, well read, organized and interested in many things” — and always a leader, which she attributed in part to her background.

“I have read that the difference between leaders and managers is that leaders have often had a traumatic beginning,” Carolynn says. “Maybe some of Edna’s passion and strength stems from being independent, an only child of a single parent and being one of those hearty prairie women?”

Edna Beange suffered declining health in June 2018 and required a palliative care team, dying at home in her sleep on Jan. 7.

A service was held on Jan. 11 at Leaside United Church.

Beange is survived by her children Donald Beange, married to Carolynn, and Jean Paradis, and by grandson Graham Beange. 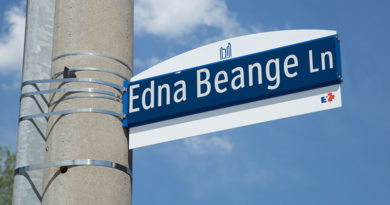 May 3, 2015 Eric Emin Wood Comments Off on Urban garden tour set to enchant