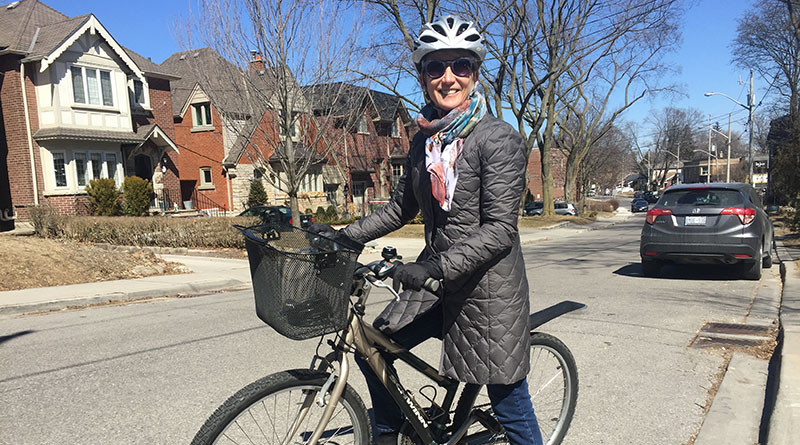 But there’s a little hitch.

“Some of the streetscape is to be done by the city and that has not been funded yet in the city’s budget,” Reid, co-chair of Cycle Don Valley Midtown (CDVM), said in an interview at the group’s Feb. 26 meeting.

“Councillors [Mike] Colle and [Josh] Matlow, I believe, have made motions that have asked the city to look into how they can make sure that happens. So we’re following up on that.”

The city’s general manager of transportation is expected to report by the end of March on attempts to speed up the streetscape work.

Bike lanes are planned east of Brentcliffe Road. “But right now they’re just painted,” Reid said. “And we would like to see those bike lanes protected.”

By “protected” Reid means cyclists want something to keep them away from cars and trucks. “The speeds on Eglinton are fast. If we want people to ride they have to feel safe, and they’ll feel safe if they’re protected.”

Bollards, a raised curb, cement blocks might be an answer. “Anything that separates, physically, the cyclist from the road traffic,” said Reid.

“The big thing is we want more people to cycle in the city. It’s part of the city’s transportation plan, and we need to allow them to feel safe if they’re going to be pursuing that.”

Reid said research shows there’s a high desire by people to cycle in the city, whether to work or leisurely. “And they would cycle more if they felt safer doing so.”

Reid said the city’s climate action plan wants to get people away from making short utility trips in their cars — less than five kilometres — and get them to do those trips on bikes. For trips less than 2 km the plan encourages people to go on foot “to reduce the amount of green house gas that may be being produced unnecessarily.”

Overlea Boulevard is another area that has CDVM’s attention. Reid said the city installed bike lanes in Flemington and Thorncliffe parks. “But they’re not connected.”

Bike lanes on Overlea, she said, would allow them to be connected and kids from Thorncliffe could ride to Marc Garneau school safely, and Flemingdon residents could cycle to Thorncliffe to shop.

Overlea lanes “would really make those [Flemingdon and Thorncliffe] lanes more useful. That’s another thing we are looking at building support for,” said Reid.

Reid said the city has revamped its cycling network plan which makes it more “actionable and realistic,” meaning cycling groups are better able to review it, respond “and get local information for it.”

“The biggest thing the city can do is to continue to build protected cycling infrastructure,” said Reid.

Bayview and Eglinton resident Nicolas Pino, who said he’s passionate about urban issues, introduced the group to a computer program he developed called Plan Together.

It will let cyclists tell the city where trouble spots are and pinpoint them on a map. Or cyclists can compliment the city for things done well. The idea is for the someone at the city to intercept the missives and pass them on to the appropriate city department.

“We’re working to really get it (the program) rolling here,” said Pino.

A woman asked Pino if the program can handle “incivility” that users might direct at cyclists. Pino said he hadn’t looked at that but added “that’s a very good point.”

The group discussed looking into whether the Thorncliffe and Flemingdon communities would be interested having a Bike Share facility.

Members spoke about an amendment to the city’s official plan, suggesting it will help pave the way for arguments to be made to advocate for bike lanes on Bayview Avenue. 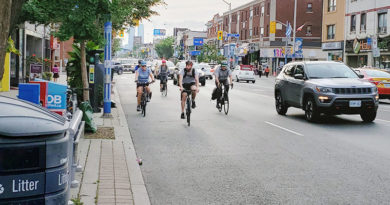 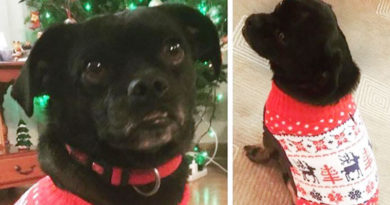