Due to budget constraints and a lack of interest, the powers-that-be are thinking about cancelling Christmas…

That is, unless one North Toronto resident has anything to say about it.

Well, at least that is the premise of the new TV movie, Cancel Christmas, starring local actor Justin Landry.

“It’s definitely a family movie. It’s pretty touching and it’s funny,” said Landry, who was born and raised in the GTA. “I think my character brings a lot of fun to the role. But there are some heart-wrenching moments in the film.”

Landry plays an elf in this original film by the Hallmark Channel. He is tasked with helping Santa—played by Judd Nelson of Breakfast Club fame—save Christmas by teaching children the true meaning of the holiday. The film was shot in Hamilton and is Landry’s first full-length film.

“This is my first movie and it’s a lead role,” Landry said. “When I got the audition and it said ‘lead role’ I thought, This is kind of a waste of time for me to audition for it.

“But they wanted a silly big elf and I pull off big and silly quite nicely.”

From 2001-2002 Landry was the host of CBC’s SmartAsk! He has also appeared in numerous commercials and even won a Best Actor Award at the 2008 Bessies for his role as Elevator Small Talk Tony in a Diet 7Up ad.

Growing up in Oshawa, Landry was always outgoing and involved. He was the host of his high school’s Christmas assemblies for three years. He also played competitive hockey and baseball before attending the University of Western Ontario where he studied political science.

As a university student, Landry got a summer job working at the Oshawa General Motors plant. It was during his time working on the assembly line that he began thinking of jokes for his stand-up routine.

“It was a great motivating factor working on the assembly line thinking, this is great but I don’t want to do it for the rest of my life. I do want to be a comedian I do want to be an actor,” Landry said.

From there, Landry worked towards that goal by developing his own one-hour long comedy show and premiering it at the Whitby AMC movie theatres.

“I made it a fundraiser for the Hospital for Sick Children and raised some money for sick kids and I got a tape out of it and that’s how I got my first agent in Toronto and a manager in Los Angeles,” Landry said.

Even before his success, Landry was focused on helping the community and the world of comedy and acting changed nothing. He spent his first three years in North Toronto volunteering his spare time as a novice hockey coach.

“It’s great to daydream about the next greatest toy or the next greatest gadget. I don’t think there’s anything wrong with thinking about that,” Landry said. “But it’s also nice to spend some time to think about what you can do for others.”

The spirit of giving is a common theme in Cancel Christmas and Landry points to one scene in particular that exemplifies this.

Typically, when children visit Santa at the mall they sit on his lap and tell him what they want for Christmas. This scene puts a bit of a spin on that tradition.

“(Santa’s) saying not, ‘What do you want for Christmas? He’s saying: What are you going to give? and people, they forget that. 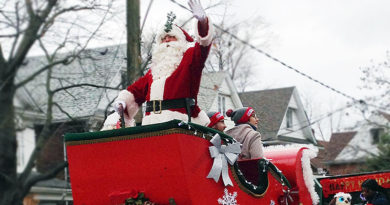