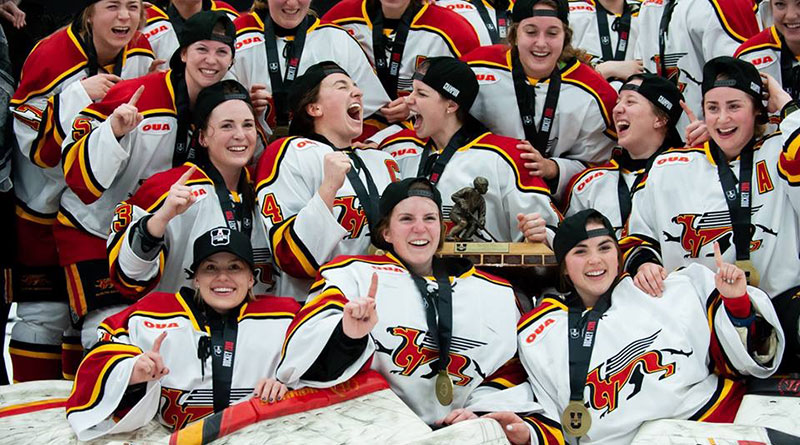 Kristen Jay, Kaitlin Lowy, Gabby Smyth and Gabi Underwood were a part of the Guelph Gryphons roster that beat McGill Martlets in the championship final March 17.

Lowy scored the game-winner to gain the team its first ever title.

Scored in the second period, and assisted by Stephanie Gava and Karli Shell, it was enough to hold off McGill, and earn Guelph a 1-0 victory.

“Obviously it feels amazing. It’s something I worked for my entire career,” Lowy said, in an April conversation, nursing a cold. “I never really thought it would happen, and it’s surreal.”

The team wasn’t expecting to make such a push. It had been to the national tournament in the three seasons prior, but nothing of this magnitude.

“We also knew we were more than capable of winning this, and we were playing the right way. It was a really relaxed feeling. I don’t think anyone was holding their stick too tight,” Lowy said. “Everyone was calm, cool and collected and knew what we had to do to win, and that was to play our best 60.”

For 16 seasons she played at Leaside with the Wildcats. A North Toronto Collegiate alum, the 22-year-old senior had moved on to Mississauga for her junior year, but she never forgot the friends she made at Leaside.

“Those teams I played when I was a young novice and atom were my time that I fell in love the game and the whole culture of it,” she said.

When asked about what it is about Guelph that drew the attention of Leasiders, Lowy said it was geography and community.

“Ultimately, it creates a culture that we’ve been brought with,” she said. “We at Guelph, share a lot of the same values that I’ve learned throughout my life as a Wildcat in Toronto.

Smyth joined the Gryphons with nine other rookies, Leaside alum Jay among them. That group formed the core of the U Sports lineup. Guelph won the provincial title that year but unfortunately bowed out in the first game of the national tournament.

Though she’ll be returning to the team next season, Lowy is looking to move on and perhaps play professionally. The recent folding of the Canadian Women’s Hockey League announced on April 1, has left her at frozen on a deciding.

“It’s obviously disappointing to hear a league go under this trouble. I’m optimistic this will mean a good regrowth in the future,” she said. “I do think a new business model was necessary – it might be a one-step back, two-steps forward situation.”

Regardless, the remaining Leasiders, Jay, Smyth and Underwood will have their eyes focused on another title in 2020.

“It’s definitely in our minds right now, but our team, when it comes to September, we’re going to take it one day at a time,” Smyth said. “When it comes to a national title and a provincial title is the end goal.” 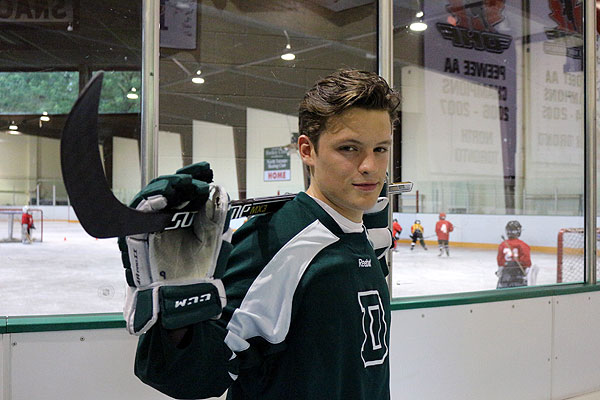 Crema still dreaming about a career in NHL

August 14, 2014 Brian Baker Comments Off on Crema still dreaming about a career in NHL