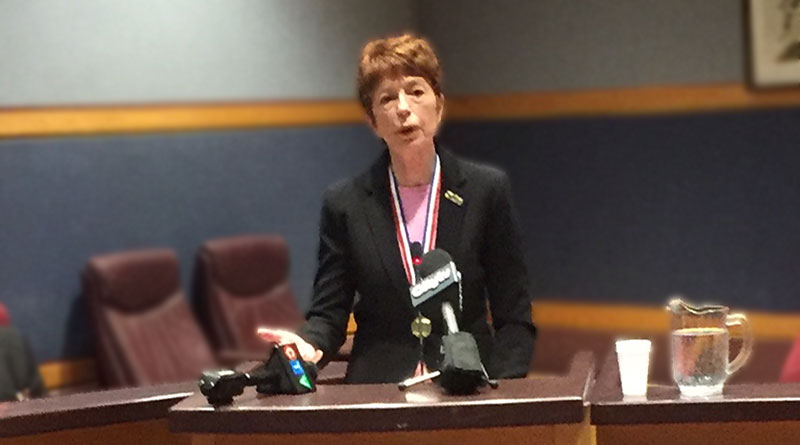 Her years of volunteer work gave her training to help get through the disaster that struck her life a year ago, Karen Fraser said in accepting the Agnes Macphail Award.

Fraser was being honoured before an overflowing crowd at the East York Civic Centre council chambers on March 24 for her many years of helping others.

People outside her volunteer circles, though, probably best know her and husband Ron as owners of the Mallory Crescent property where victims of a serial killer were found between January and July 2018.

Fraser herself drew the connection between her community work and helping prevent such disasters in the future.

This attitude was reflected in comments by her nominator for the award, Sally Spofforth, one of many speakers who recalled Fraser’s accomplishments.

“My philosophy is simple. We are a quilt in Canada, an opportunity quilt that can keep us warm against that north wind….

“But if we let pieces fray, first of all they won’t be able to make their contribution to the pattern and secondly, if the fray becomes a tear, the cold wind will chill all of us.

After McArthur’s arrest, when the community was inundated with media and neighbours feared property values plummeting, people talked of putting up fences and signs to keep gawkers at bay, Spofforth recalled.

“However, in contrast, Karen and Ron warmed us all by hosting various community events to which the police, media, neighbours, and LGBTQ community were invited, and the events included a healing ceremony with ministers of various faiths,” she said. “We were involved in planting daffodil bulbs in their ravaged gardens and most recently [held] a one-year-tribute to the victims featuring a lone piper.”

Fraser also had their orange garage door, which had featured in many news stories, painted a soft grey with the song lyrics, “We are one. We are how we treat each other when the day is done.”

But most of the tributes to Fraser dealt with her extensive volunteer work over the years before the events of early 2018.

“Karen, like Agnes Macphail herself, is no ordinary woman,” Spofforth said. “She inspires, builds programs, raises funds, provides opportunities for those often on the fringes of mainstream society, such as new Canadians, the unemployed, the homeless, victims of disaster, the young in need in Canada and internationally, seniors and emerging entrepreneurs.”

Fraser herself recalled being called in the middle of cold nights to help suffering homeless people or to sort out other crises.

But her talk was devoted to encouraging others to volunteer, which offers many benefits including widening your experience, teaching you skills you can’t get anywhere else, building a network of “amazing people” and new friends — and also because “it’s fun.” Humour is an important ingredient in community work, she said in a speech that often had the audience laughing.

Agnes Macphail was the first woman elected to Parliament in Canada in 1921 and to the Ontario Legislature in 1943. She has become an icon for defending women’s rights and human rights. The Agnes Macphail Award was established by the Borough of East York Council in 1994 to recognize outstanding volunteer leaders in social justice initiatives.

The keynote address this year was given by Kathleen Wynne, MPP for Don Valley West, on “Girls, Women, Civic Engagement and Societal Prosperity” — in which the former Ontario premier recalled her experience as a woman in the halls of power and called for more female involvement in politics.

Tribute was also paid to the the first winner of the Macphail award 26 years ago, Edna Beange, who died on Jan. 7.

Sheila Lacroix called Beange a “woman of firsts” and listed her many accomplishments.

“Every time I walk past STAHIL,which stands for Staying At Home In Leaside, a life-lease building for seniors on the corner of McRae and Bayview, I think of Edna,” Lacroix said.

“She was an active participant in this challenging and risky project and late in the process decided to live there. Aren’t we happy that she was able to reap the benefits of this project and spend her last years in her lovely suite overlooking the leafy gardens of Leaside, East York?”

Fraser opened her own speech with a humorous remark on her acquaintance with her forerunner.

“If the late Edna Beange was here, she would be recruiting each and every one of us to be working on whatever committee had caught her passion at the moment —”I learned to say, ‘Hi Edna, no I can’t,'” she said. “In her memory I think I’ll give my own pitch for why you should volunteer.”

February 1, 2011 Town Crier staff Comments Off on Speak out at town hall