Often, when I’m paying a visit to the Town Crier office at Yonge and St. Clair I’ll cut across Mount Pleasant Cemetery to avoid the traffic, and admittedly the living.

As a writer, I appreciate that I can pull last names from tombstones of the past, and use them in my own fiction. I’ll pay a visit to where Canada’s longest-serving prime minister, William Lyon Mackenzie King, rests his weary bones, and then be on my way.

But a year ago, I came across something new on my sojourn through the grounds. I discovered an unmarked monument with a gargoyle atop it, shielding his eyes with his hand.

The look of shame, or humour depending on your interpretation, triggered curiosity in me. Friends encouraged me to dig deeper and uncover the real meaning behind the statue. I even use it as my Twitter cover page because it evoked something in me.

With my interest in all things horror – I’ve written about ghosts and the house used for Black Christmas in previous articles – I figured I would do my best to find out who was behind the monument that greets visitors on the west entrance off Yonge Street.

I asked Rick Cowan, the communications lead at the Mount Pleasant Group, about who the rights holder was, but unfortunately both the unnamed individual and Cowan were mum.

“He was flattered by your interest but has respectfully informed us that he prefers to remain anonymous for now,” Cowan wrote in an email. “He did say that he hopes that the interest in the monument’s design will inspire others to create beautiful and unique memorials.”

The latter of course elicited a raised eyebrow from me.

I think it’s a great idea to mark one’s impact on life. An even better one is to use a bronze cast of a gargoyle. It certainly does stand out, even if the monument is small compared to the Stavro, Massey and Eaton family crypts.

It also took me back to a university project I did at the University of Toronto. My undergrad was archaeology, and for our introductory course we were sent to St. James Cemetery at Bloor and Parliament streets to map all the symbols and styles of headstones. Why St. James? Well, it is the oldest in the city, dating back to 1844, predating Mount Pleasant by 32 years.

The designs of tombstones have varied over the years, but in all honesty, they’re somewhat boring in the modern era. Slabs of granite with engraved names in them and nothing to really show about who those people were.

As morbid as it may seem, Mount Pleasant Cemetery is still one of calmest places to venture in this crowded metropolis, and it is also a historical touchstone.

As Cowan noted, I hope the unidentified man’s gargoyle monument becomes an inspiration for some to think outside the box when planning a mark for their final resting spot. 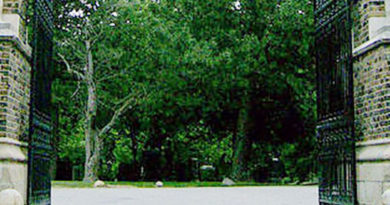 One thought on “Mount Pleasant gargoyle a graveyard mystery”