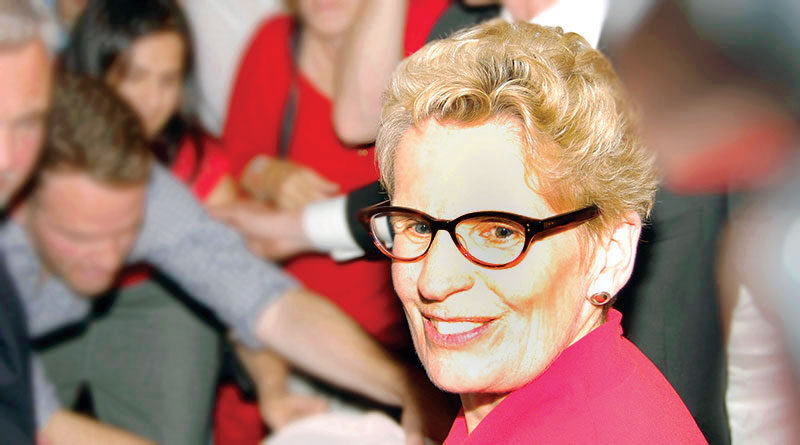 In light of former premier Kathleen Wynne’s recent decision not to run for re-election as Don Valley West MPP in the next provincial election, we are reprinting a speech she made entitled “Girls, Women, Civic Engagement and Societal Prosperity.” Her remarks were made at the Agnes MacPhail awards ceremony in East York on March 24, 2019, when Leaside resident Karen Fraser was presented the MacPhail award.

It’s such an honour to be here today with all of you — people who care deeply about civic engagement, community and democracy. Every year you honour Agnes MacPhail, a woman who embodied the values that support a strong civil society and who fought for the rights of all Canadians to live decent lives. MacPhail fought for farmers, she fought for prison reform and she fought for women’s rights. I continue to be impressed by your consistent commitment to her memory. You are part of her legacy.

And today it is a great pleasure to be a part of a ceremony to honour Karen Fraser, whom I have known as a woman dedicated to supporting other woman in their business and their lives, to volunteering in Ontario and beyond, supporting women, the environment and the community. The last couple of years for Karen and Ron have tested them beyond what most of us have ever had to endure. Their lives have been very publicly touched by horrific crime and tragedy and they have responded with dignity and grace. I am not exaggerating when I say that I am in awe of the calm, mindful charity that has been the hallmark of their response to the death and sadness that has literally surrounded them.

So in my remarks today, I want to honour the memory of Agnes and the strength of Karen. I want to talk about why we have to, even in 2019, be very intentional about supporting young women in living out their dreams.

As I was working on these remarks yesterday, my 9-year-old granddaughter, Olivia, came into my room and looked at the article by MacPhail that I had on my desk entitled “Men Want to Hog Everything” from September 1949. Her response was, “That’s for sure, the boys in my class think they’re better at everything.”

Former prime minister Brian Mulroney, just this month, saw fit to call a female MPP, Amanda Simard, “little girl” because she dared to oppose the actions of his daughter. Social media is rife with disgusting, toxic language about female politicians.

We simply cannot allow any of this to hold us back. I’ve been fighting this fight for nearly 50 years. The pace of change is just too slow. Of course there has been change but we need to talk to each other differently. Agnes MacPhail has something to say to us about this.

The education of women is the greatest predictor of prosperity and civility in a society. So there is no debate about whether it is a good thing for girls and women to be actively engaged but there is a serious question as to how to make that happen more completely.

She talks in that 1949 article about her first election in 1921 which she says she won “in spite of being a woman.” She famously persevered and prevailed in the face of men’s attitudes towards her. “Don’t you wish you were a man?” “Yes, don’t you?” She straight-up acknowledged that “the dice are loaded for half the population.”

MacPhail said, “I want for myself what I want for other women, absolute equality.” That is what she fought for but it is obviously not what was achieved in her lifetime, nor in mine.

Since MacPhail’s time, research has confirmed our intuition that when there is a critical mass of women at a decision-making table, different issues are addressed, corporations do better and more people are better off. The education of women is the greatest predictor of prosperity and civility in a society. So there is no debate about whether it is a good thing for girls and women to be actively engaged but there is a serious question as to how to make that happen more completely.

We have to start by being honest about the reality that although things have changed a lot since 1921, we are definitely not finished.

Was it harder for me than for a man? It’s really hard to answer that question. It’s exactly like when people asked me what it was like to be the first woman premier. I knew that they were asking about the challenges of being a woman in a male-dominated world but my top-of-mind response was that I really couldn’t compare having never been a male premier.

I just don’t have the lived experience of a man. And none of that made me angry or upset, it was and is just the reality.

What got in the way for me and for all of us is that those differences made us less than.

There were lots of people who saw barriers and reminded me that they were in my way along the way. I listened and then….

When I was elected leader in 2013 and took over as premier from Dalton McGuinty, there were an unprecedented number of women in premiers’ chairs across the country — six of 13 to be precise. We were of different party stripes. We had different life experiences and very different styles. When we met for the annual premiers’ gathering in the summer of 2013 at Niagara-on-the-Lake in Ontario, our numbers were remarked.

Whether the decisions we took at that meeting would have been different without all of us there, who knows?

Would we have reached agreement to support the national Indigenous organizations’ call for an inquiry into missing and murdered Indigenous women? Maybe, but maybe not.

Would we have laid the groundwork for a Canadian energy strategy? Maybe, but maybe not.

What I can say, is that with all our differences and divergent views, not one of that six was able to be re-elected to form government. There is currently one woman premier in Canada, Rachel Notley of Alberta, and she was not at that table in 2013.

So all of the pundits who were proclaiming that gender parity was here to stay — a cry that all of us in elected office tried to temper — were wrong. The question of why none of those women is still standing hangs in our political history unanswered.

I think it is important that we are honest about the reality of misogyny online and in person — that attitudes have changed but often more in the abstract than in the flesh.

I’m not going to try to answer that question, you will be happy to hear. There are different circumstances province by province and woman by woman. I will, however, offer one anecdote just to say that the issue of us being women in leadership has to be part of the ongoing analysis.

This story is about a moment when I was going about my business, not engaged in a political discussion, certainly not thinking about being a woman doing my job, just doing my job.

It happened shortly after I had been sworn in as premier in the North Toronto neighbourhood where I have lived for 36 years. I can’t remember where I was going but I was walking down the sidewalk (presumably with my security detail following along) when I stopped for a moment to talk to a friend whom I’ve known for all of those 36 years. Our kids went to school and church together; he was always involved in and interested in politics although of a different political stripe; he had been a Progressive Conservative all his life. But since 1995 and the neo-Conservative rise of Mike Harris in Ontario and the stripping of the progressive arm of the Conservative movement, he has been a supporter of mine.

We were friends. We had mutual friends from our past and from the neighbourhood and to a very large extent, we shared a world view. I say all this too make it clear that the comment he made to me was in no way malicious or intended to wound. What he said was a casual comment coming out of his experience of politics in Canada and Ontario.

We were talking about the political situation in the province and he looked at me, almost chuckling and exclaimed how amazing it was that I was premier because, he said, “You were just a Mom!”

I will never forget that exchange and I bear him no malice nor did I challenge him in the moment because I know exactly what he meant. People like me did not become premier. I wasn’t a man; I wasn’t a lawyer; I wasn’t wealthy or well-connected; I hadn’t spent my life in politics; I wasn’t famous or even well-known for any extraordinary accomplishments. I was a strong, well-educated, competent woman who was a mother, who worked hard but worked part-time, was an activist volunteer and raised my children. Not the usual profile of an aspiring political leader.

The reality of misogyny

There are countless stories that women politicians, entrepreneurs, leaders can tell that remind us daily that the realities that confronted Agnes have not changed completely.

Agnes had a very clear-eyed view of the world she lived in and how she had thrived:

“There were many things that made me realize that this is a man’s world, but I managed to survive. I survived partly because I have a temper like a tinderbox soaked in coal oil and a tongue that men have learned to respect.”

When young women ask me about my experience now, I am less willing to gloss over the challenges. I think it is important that we are honest about the reality of misogyny online and in person — that attitudes have changed but often more in the abstract than in the flesh.

Agnes MacPhail was born in 1890 which seems like a very long time ago to many of us. But my grandmother was born in 1888 and I knew her well. She lived until I was nearly 30 years old and I loved her spirit and spunk. She never ran for office but like Agnes she attended Stratford Normal School and began teaching in the early 1900s. She taught for nearly 20 years before she married and the first election she would have been allowed to vote in, when she was 33, was the election in which Agnes ran and became the first woman to serve as an MP in Canada.

I wonder often what my grandmother would think of the progress we have made and the strides we have not taken. She and Agnes would, I think, agree that there is so much more to do.

Along with her sharp tongue and her sharper temper, in 1949 Agnes had these words of wisdom for young women of her day:

But more important, I managed to keep a sense of humour for which I was many times grateful. Without it I’m afraid I never could have lasted. But most important I tried to be natural, to say what I thought sincerely, to abide by my own standards. That sums up the most important advice I can pass on to women today.

Agnes’s advice stands the test of time. And I would only add to it that any young woman who is looking to make a contribution to her society would do well to look to the example of Agnes MacPhail and the strength of Karen Fraser. 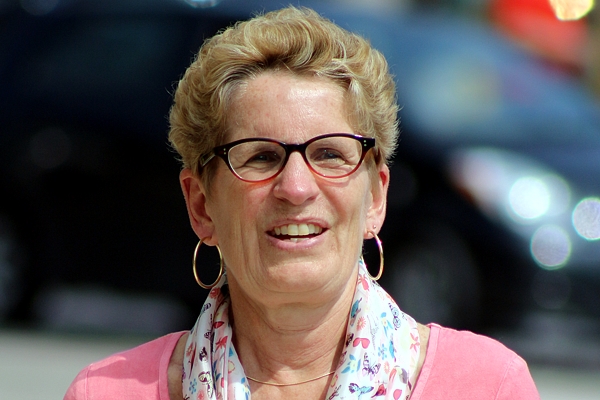 June 12, 2014 Philip Alves Comments Off on A fresh Wynne sweeps across Ontario 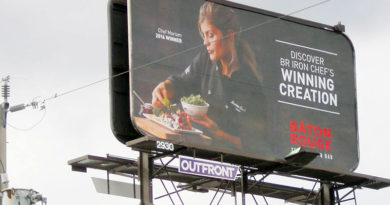 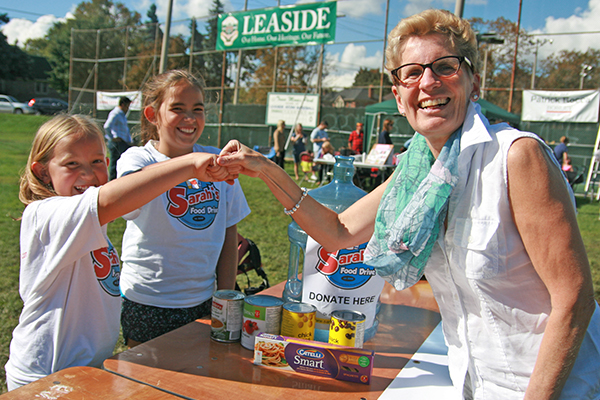