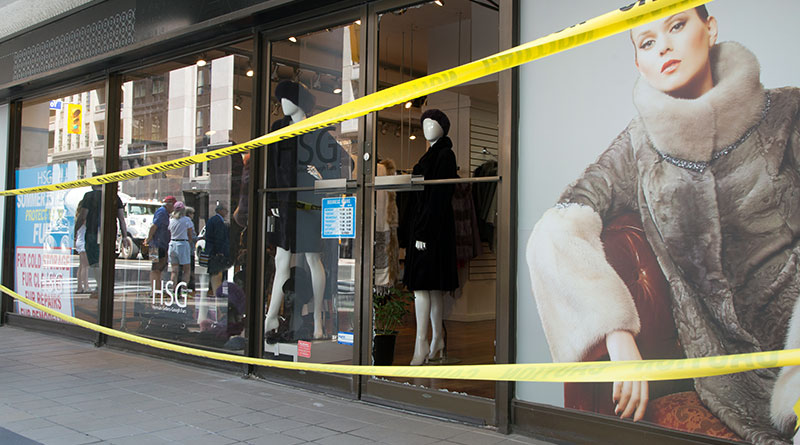 Alexei Malakhov/Streeter LONG SHOT: A glass door at a fur shop on the east side of Bay Street was shot out by one of the bullets from the shooting on the west side of the street.
Edition: Central Toronto
*FEATURED NEWS
May 29, 2018May 29, 2018 Rodger Burnside Bay Street, homicide, shooting, Toronto Police, Yorkville Avenue

A man is dead and another male is being sought by police after a shooting on Bay Street at the corner of Yorkville Avenue last night just before midnight.

The victim has been identified as Matthew Staikos, 37, of Toronto.

Police, responding to a call for a shooting in the area on May 28 at 11:30 p.m., found the man suffering from gunshot wounds. He was later pronounced dead at the scene by paramedics.

The shots are thought to have originated on the southwest corner of the intersection, near Puseteri’s Fine Foods, where Staikos was found. But at least one bullet crossed the street and took out a glass door at Herman-Sellers-Gough Furs on the southeast corner.

A male reportedly fled the area in a vehicle described as a silver or grey, four-door Mercedes. He is described as black, 5-foot-10, and of medium build.

It was Toronto’s 36th homicide of the year.

A post-mortem examination of the deceased is scheduled for May 30.