Caplansky’s deli owner Zane Caplansky could soon be parking his food truck north of Yonge and Eglinton after all, since the city’s Licensing and Standards committee has recommended relaxing food truck bylaws.

The proposal approved on March 18 had been modified to remove a controversial provision that would have defined certain areas as “restricted zones” and invited business improvement areas and local councillors to help define those zones. Caplansky had previously threatened legal action if the new legislation included the “restricted zone” provision.

“We met with a lot of politicians and twisted a lot of arms,” said a jubilant Caplansky, who plans on bringing his food truck to Yonge and Eglinton when the new legislation is in place. “But it worked out at the end of the day.”

Councillors and BIAs might still be allowed to protest the presence of food trucks in certain locations after city council votes on the new rules on April 1, but Caplansky called the committee recommendation a “very hopeful next step.”

Ward 22 councillor Josh Matlow, a proponent of food trucks at Yonge and Eglinton, said he was pleased by the committee’s modification of the current proposal but thinks the city needs to lift as many of its remaining restrictions as possible.

Should the proposal become legislation, licensed food trucks will be allowed to pay for parking and operate for five hours at a time at any metred space or parking lot that is at least 50 metres from an open restaurant. 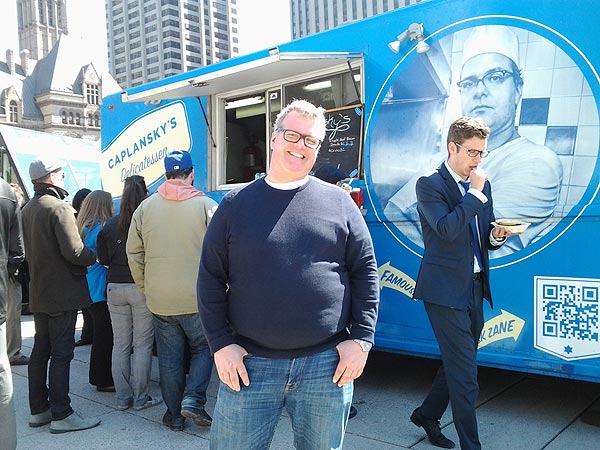