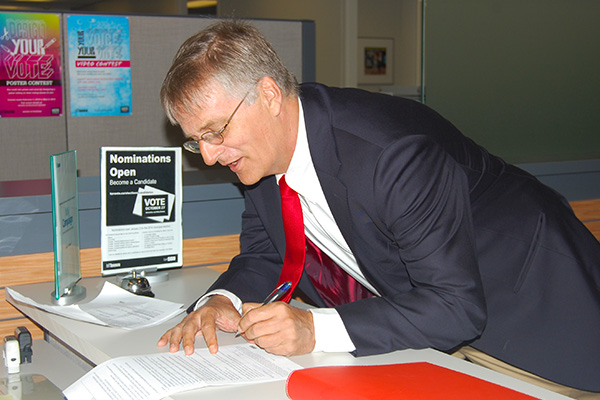 Shawn Star/Town Crier BACK FOR MORE: Terry Mills, runner-up to Karen Stintz for Ward 16 last time around, signs nomination papers at City Hall on June 17. He is the eighth candidate vying to be the replacement for Stintz, who is running for mayor.
NEWS
June 18, 2014June 19, 2014 Shawn Star Eglinton-Lawrence, municipal elections, Terry Mills

Calling it “a new game” now that Stintz has stepped aside to run for mayor on Oct. 27, he has thrown his hat into the ring for a second run at the Eglinton-Lawrence seat.

The 63-year-old Yonge and Eglinton based designer filed nomination papers at City Hall on Tuesday, to become the eighth candidate seeking to replace Stintz. Software developer Peter Vukosavljev, filing on May 27, is also a recent addition to a field of candidates that is quickly becoming crowded.

Mills says transit, development, parks and public realm, as well as city management are the main issues facing the ward. He says he expects the debate to be focused largely on local neighbourhoods.

“It comes down to who has the capabilities and credentials to do the job to serve the ward,” he commented, shortly after signing on. “What you want in a local councillor is somebody who can look after the affairs of the ward and as they relate to the context of the city.”

Mills cites as credentials his architecture degree and more than 20 years running a design firm, as well as working with councillors and city planners in city projects such as the Midtown Planning Group and Eglinton Connects, the streetscape planning study complementing the Eglinton Crosstown LRT construction.

“I have a very good appreciation of how the city works and how to turn concerns and issues into practical solutions,” he said. “Ultimately, what is important is how to create a city that can live within its means.”

Matlow to run for city council

So, what does a city councillor do?