A cult classic-turned-musical takes over the Danforth Music Hall this month.

The Toxic Avenger[/url], the eco-monster comedy based on Lloyd Kaufman’s 1984 film, previews until Oct. 30 with opening night set for Halloween.

Slated as New Jersey’s first superhero, the Dancap Productions[/url] show features Toxie, a loveable seven-foot mutant whose sole mission in life is to save his beloved New Jersey from an environmental disaster.

He also has the hots for a blind librarian, making the musical not just about eco-love, but love in all its mutant-human forms.

As the winner of the 2009 Outer Critics Circle Award for Best New Off-Broadway Musical, Avenger features music and lyrics by David Bryan, a founding member of rock group Bon Jovi, and book and lyrics by Joe DiPietro, of I Love You, You’re Perfect, Now Change fame.

Avenger is still at hit in New York City, where it recently celebrated its 100th performance at New World Stages.

Leslieville’s Smith is equally pleased to be starring in a local production.

The young actor, who plays nerd Melvin Ferd III before he’s thrown in a vat of radioactive waste by bullies transforming him into Toxie, says his role is demanding in more ways than one.

“It’s the hardest work I’ve ever done … it’s vocally and physically demanding,” the George Brown Theatre School graduate says about Avenger’s inclusion of such songs as “Thank God She’s Blind, You Tore My Heart Out” and “My Big French Boyfriend”.

Even with all the singing and dancing, there are no intermissions in the 90-minute production.

“I’ve never sweated so much as I do with the costume,” Smith says with a laugh.

Smith, who starred as Matt in Red Barn Theatre’s The Fantasticks, describes Avenger’s script as a laugh-out-loud number with some of the funniest stuff he’s ever read.

He particularly says his role as Melvin is close to his heart, and he describes his own personality as a nerd.

The production for what it’s worth is very, very funny,” Smith says over the phone. “But it also deals with inner beauty and the environmental backdrop to it.”

Smith says he wasn’t good at math, nor was he good at any other profession, except acting.

Luckily the profession was one he adored.

“It’s a feeling I can’t really describe,” says Smith, who as a child dreamed of becoming an astronaut until he realized multiplication wasn’t his forte.

“(Performing) happened out of necessity.” 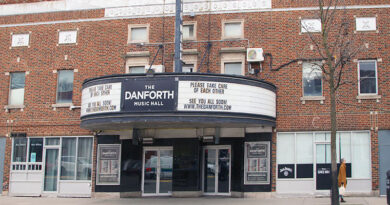 Is our arts centre gravy?