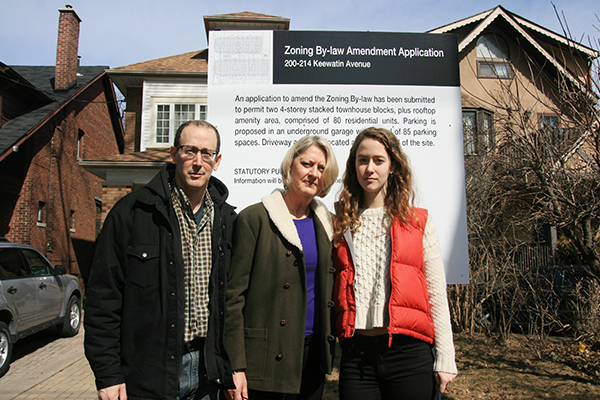 A new development proposal in North Toronto is drawing the ire of neighbours and the local councillor after developers advertised units for sale in a local publication only days after the release of a city planning report that expressed reservations about the project.

Marcia Visser, who lives down the street from the eight detached houses along 200–214 Keewatin Ave. that Freed Development Corp. and Trolleybus Urban Development Inc. have proposed replacing with a four-storey, 80-unit stacked townhouse complex, convened 22 of her neighbours for a meeting on April 1 after spotting an ad for “80 contemporary stacked townhomes on Keewatin Avenue at Mount Pleasant.”

“As you can probably guess, there was strong opposition to the proposal,” she said on April 3, when she and 15 disgruntled neighbours gathered at the site to air their opposition for the Town Crier.

“The community feels this is already a done deal, but I want to inform the community that discussions are in the early stages,” she said.

John Andreevsky, the city planner in charge of the application, said that while developers are legally entitled to advertise a development that hasn’t been approved yet “it’s a risk they run, because the application could be refused.”

“Even if it gets to an approval stage, it’s typically very different from what they’ve come in with on day one,” he said.

In his report, Andreevsky expressed concern the application may not comply with the city’s Official Plan, which states that a neighbourhood’s prevailing building type will remain its dominant form of development.

In a neighbourhood dominated by detached houses, the community is concerned the stacked townhouse complex as proposed will set a precedent other developers could use in future proposals, Visser said.

“We’re not about stopping progress, but we need to preserve and enrich our neighbourhoods,” she said. “Building 80 units, with two times coverage, right next door to single-family homes that have back and front yards … will destabilize the neighbourhood.”

She said it is important that local residents “advocate and act against this type of zealous, inappropriate proposal.”

Ward 25 councillor Jaye Robinson, who calls the proposal “outrageous,” said she will extend the notice area for a future community consultation meeting far beyond the 120-metre radius required by the city’s Planning Act.

“There’s been an extraordinary amount of development and intensification in the Yonge-Eglinton area, and now it’s moving north,” she said. “If this is not the best example of outrageous planning in the city, I don’t know what else would be.”

Like Visser, Robinson said she fears that by advertising their project in advance the developers are telling the community their voices won’t count if they speak up.

Freed Development Corp. and Trolleybus Urban Development Inc. did not respond to requests for comment.

Take power from OMB, give it to local body