March 24 marked the 20th annual Agnes Macphail Day in East York, a commemoration of one of our nation’s foremost trailblazers in the field of women’s rights and a former East York politician.

This year, the Agnes Macphail Award was given to another former East York politician, Alan Redway.

“I feel very honoured and very humbled to receive the award,” Redway said following the ceremony. “Certainly it’s a very prestigious award and I didn’t really feel that I was one deserving of it or in line for it but at the same time I’m certainly very grateful for being chosen.”

Redway received the award at the East York Civic Centre where his photo already hangs from the wall from his time as mayor of East York. He was also Canada’s last dedicated minister of housing and growing up, his house was only two or three blocks away from where Macphail lived.

He began his career in municipal politics before becoming a Progressive Conservative MP in 1984. Despite his role in the cabinet, Redway said he was never afraid or discouraged from speaking his mind.

“During my time in Parliament, I often spoke out against the government but Prime Minister [Brian] Mulroney didn’t discipline me in any way and gave me free reign to speak out if I wanted to,” he said. “I always felt that there was a feeling that my views were at least respected whether they were agreed with or not.”

That respect was reflected in the fact that people of all political stripes were on hand to witness the ceremony. Conservative MP John Carmichael rubbed elbows with NDP MPP’s Peter Tabuns and Michael Prue, who recalled how Redway continued to fight for social causes even after his political career was over.

“He didn’t just stop, he went out and did all kinds of other things as a private citizen and he has done and tremendous amount of good for our community,” Prue said. “I think he’s a totally wonderful man.”

Although he is most well-known for his work with social housing, Redway has also assisted the Leaside Property Owners Association, Flemingdon Community Legal Services and the Daily Bread Food Bank.

“He is a person who is much like her, who really cared about the community and people in it, whether they be rich people or poor people,” she said of Redway. “It’s very rare in life that you meet someone who can go to a gala dinner and sit with heads of state and then the next day come into a food bank and deal with people living in abject poverty with the same respect.”

Nyberg also mentioned the respect she had for Redway’s humility.

“He is very modest in his accomplishments and believes he does things as a team,” she said. “I think he doesn’t give himself enough credit.”

When asked about Macphail, Redway said East Yorkers deserve part of the credit for the history she made.

“I always felt proud in the fact that it was the people of East York that had made her the first woman ever elected to the Ontario Legislature,” he said.

In fact, if he had his way, East York would be its own city once again. He is currently working on releasing a book this year tentatively entitled, The Real Common Sense Revolution: Deamalgamation.

“I think East Yorkers have a strong feeling of identity with the community,” he said. “It’s always been a community with a heavy involvement from volunteers and people that look after one another.

“So I would hope if I’m remembered at all I’d be remembered for the effort to preserve East York and other parts of Toronto.” 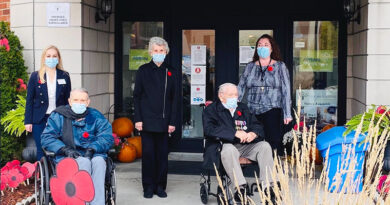