To celebrate its centennial the branch is undergoing a makeover with a rejuvenated main floor. Plans are also in the works to replace the heritage building’s staircase.

Though the current building, located on the southwest corner of Medland St., is 100 years old, the library’s origins date back even further.

In 1888, the West Toronto Junction Mechanics Institute, a precursor to the library, was established.

Two decades later, philanthropist Andrew Carnegie granted $20,000 to the Town of West Toronto Junction to build a library, on the condition the free West Toronto Public Library board be created.

In 1909, Ellis and Connery, the architectural firm of Junction resident James A. Ellis, was commissioned to design the Beaux-Arts style building.

That same year, the former city of West Toronto was annexed to the City of Toronto so its assets — including the Annette branch — went with it.

Today the heritage building features an elaborate plaster ceiling with a skylight in the foyer, which was uncovered during a renovation by Siliaste and Nakashima Architects in the late 1970s.

Beyond ceiling design, the building also features a blend of other architectural styles — pilasters, capitals, cornices and cross-paneled beams define a rotunda from adjacent reading rooms.

This past summer a state-of-good-repair project brought new carpeting, furniture and a Teen Zone with two new computers.

But they aren’t done with Annette.

Library officials have organized the Annette Street Centenary Project to raise $20,000 to replace the entrance banister.

“We didn’t have enough money to be able to do that in our recent retrofit at the branch but we feel there could be an improvement to the staircase as you come in that would be more sensitive to the style of the building,” said Anne Bailey, director of public branches.

The library also boasts a 20-year partnership with the West Toronto Junction Historical Society, which is housed in the basement.

On Sept. 12 the library hosted a public party, complete with a historical walking tour and heritage plaque presentation. Barbara Myrvold, author of The Most Attractive Resort in Town: Public Library Service in West Toronto Junction 1888-2009, also attended to sign copies of the book.

Indeed, the celebration was a fitting tribute to an iconic building.

“It speaks of the history of the community and it’s also providing a relevant service today,” Bailey said. 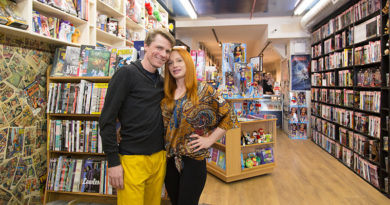