In an interview in his City Hall office, Colle said he plans to focus primarily on how to improve and increase existing transit service, without getting “bogged down” in debates on the bigger picture.

“We need to try and not get so bogged down in the expansion debates,” he said. “I know they’re going to happen and I know we’ll have them, but part of the role of the TTC and the board is to make sure the oversight is there so service improvements will be made in a way that is tangible for riders.”

Colle takes over from Councillor Maria Augimeri, who held the position for nine months as a caretaker while previous chair and former midtown councillor Karen Stintz vacated the post in an ultimately unsuccessful bid for mayor.

Colle is the third midtown representative to head the transit commission in recent years. Howard Moscoe, his council predecessor in Ward 15, was at the helm from 1998 to 2000. Stintz, then Ward 16 councillor, headed the TTC from 2010 until she resigned the post in February this year.

From a local perspective, Colle said one of the issues he’s pushed for is time-based transfers along Eglinton Avenue routes, in an attempt to improve service during the years-long construction of the Eglinton Crosstown LRT.

“If you’re stuck on Eglinton in construction and your bus isn’t moving, you can jump off, grab some dinner — maybe your dry cleaning — and then get back on,” he said. “It provides a better service for people, it attracts them to it and it helps the local businesses that are having a real tough time because of construction.”

Colle’s father, Eglinton-Lawrence MPP Mike Colle, also served as TTC chair. He was transit boss from 1991 to 1994, during his second and final term as part of the Metro Toronto council.

“Everyone likes to ask about the family connection,” the younger Colle said, with a laugh. “I always say my mom’s more excited about that than anyone.” 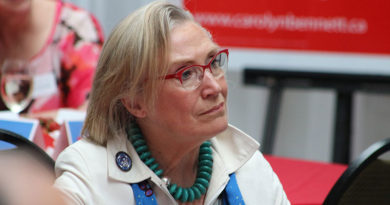