A suspect in the Canada Day killing of a man near Victoria Park Avenue and Eglinton Avenue East has turned himself into police.

Anthony Campbell, 27, surrendered to 32 division police at approximately 4:45 p.m. on July 4, according to police reports. He was wanted on a warrant of second-degree murder.

At 6:14 p.m. on July 1, police arrived at 7 Biggin Ct. where more than 20 people were attending a barbecue, said Constable Tony Vella of Toronto Police Services. A pick-up basketball game had been underway at the rear of the low-rise building before an altercation arose.

“There was a fight that occurred and as a result one person was injured,” Vella said. “He was driven to hospital by his friends.”

According to police reports, at approximately 6:30 p.m. 39-year-old Shawn Charles was dropped off at a hospital with several stab wounds. He later succumbed to his injuries.

Police would not say whether the victim or the suspect are residents of the dead-end street though they did say that there were many people watching the basketball game at time of the incident.

“We’re urging anyone that may have seen the basketball game, spectators, to come forward and speak to police,” Vella said. 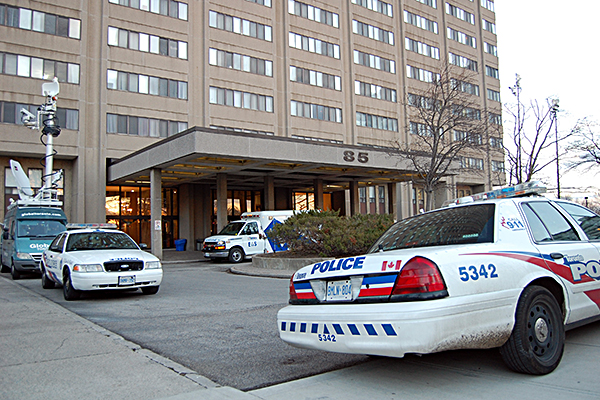