This article has been corrected from the version that appeared in print.

The fuss over prime time ice use in Toronto’s arenas isn’t cooling down — it’s just about to heat up.

Late last year the Toronto Leaside Girls Hockey Association began a campaign to get better ice time at board-run arenas, saying the burgeoning number of female hockey players in the city weren’t getting their fair share.

After a much-publicized battle that resulted in a Dec. 4 council decision that the city should take on a larger role in monitoring ice time allocation at board-run arenas, Leaside Girls Hockey is now getting what they fought for.

But not without displacing groups that have been traditional users of the timeslots.

“Lots of people are angry about it,” said AJ Hyman, an organizer of the Monday Nighters, an adult group that has played pick-up hockey at the Larry Grossman Forest Hill Memorial Arena for 32 years, in a statement.

Earlier this year, the Monday Nighters were told they would be booted from their timeslot, victims of the new shuffle. Having played their last game at the arena on Victoria Day weekend, the Monday Nighters aren’t sure at this point if they’ll be able to find a replacement timeslot elsewhere.

To the west, the Victoria Village Hockey League, a youth house league that has enjoyed a five-hour slot on Sundays for the past five years at Angela James arena, was told in early May that next year they have to give up their spot to the Leaside Girls league.

Unlike the Monday Nighters in Forest Hill, Victoria Village, which last year had enrolled about 430 players, isn’t going down without a fight.

“The ice allocation policy isn’t working,” said Greg Hopper of the Victoria Village Hockey League. “Somebody’s down there (at city hall) making decisions that shouldn’t be made.

“They decided (to) take the ice away from an existing house league program. We’ve told the city that’s not right. They can’t do that.”

Hopper said that he’d been given a guarantee by city staff that the ice allotment shuffle wouldn’t affect house leagues.

The issue of fairness here is murky. Under the new rules, both the Leaside girls’ league and the Victoria Village league qualify as top priorities for ice time here.

The difference, as Hopper sees it, is that the Victoria Village league is established at Angela James arena.

In an interview with the Town Crier last November, Councillor Karen Stintz weighted in on the matter, favouring the historical users.

“The groups getting ice time have long histories, and paid for and funded these rinks,” Stintz said.

On the other side of the coin, Leaside girls’ league boss Ron Baker has said that while they don’t want to push anyone out, they believe that ice allocation should reflect the current demographic of the hockey players in the neighbourhoods surrounding the arenas.

Some Victoria Village parents have suggested picketing in front of city hall, but Hopper is taking a more direct route — he brought the issue to local councillor Denzil Minnan-Wong.

The Ward 34 rep wrote a letter to the Community Development and Recreation Committee meeting, asking staff for a report on the unfair decision to cut Victoria Village’s time at Angela James Arena.

He requested the report be presented at June’s committee meeting so that the many families who will be impacted by the loss of this ice time have the opportunity to be heard.

“They have offered us alternative ice but we’ve said we won’t accept the alternative ice unless we’ve lost this battle. If we’re not going to get the ice back, then we’ll take (other) ice,” Hopper said.

“Our house league is growing, we’re doing everything right and all of a sudden the city comes along and says ‘let’s take the ice away’.”

In Hyman’s statement announcing the Monday Nighters final game at Forest Hill arena, he indicated what he thinks is the real problem behind the ice allocation issue — a shortage of new rinks.

“Many of us understand that the real culprit has been a long history of short-sighted urban planning which hasn’t seen a new city-run rink built in a quarter century.” 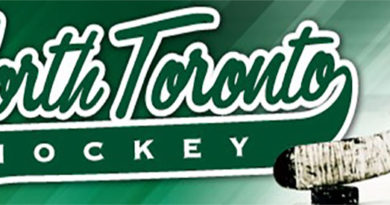 Hockey gets a hand up