For vandals, it would seem the third time was the charm.

After a drive-by shooting on Dec. 3 and an arson attack from Molotov cocktails on Dec. 6, the house at 489 Winona Dr. was set ablaze just before 10 p.m. on Boxing Day, resulting in a five-alarm fire that ultimately gutted the home.

The owner of the home is believed to be Bojidar Zahariev, the founder of high-end skincare brand L’Acrima, which has a store in the luxury Hazelton Lanes mall in Yorkville. He lived in the home with his wife and two young children, who all escaped the blaze without injury.

One woman who lives on the street said she was home when the fire happened. She went outside to see what all the commotion was, and she was shocked by what she saw.

“I saw the firemen and I thought maybe something was on fire in (Vaughan Road Academy),” said the woman, who wouldn’t give her name. “It was so scary, I never imagined it would happen to this house – this was the most beautiful house on the street and it burned down like that.”

The woman said she was so scared at the time, that she didn’t leave her own home – even to go to work.

Some of the woman’s fears can be put to rest, though, since police say it was not a random attack.

In fact, Toronto Police Detective Paul Lentsch said the fire is officially being considered arson, and was caused by ‘an unknown incendiary device.’ He also believes this latest attack, along with the previous two, are likely the work of the same group.

“We believe there is a connection,” Lentsch said, adding that in the last week or two police had made an arrest in the case. “One person was arrested in relation to a threatening of the homeowner, but right now it’s unknown how many individuals are responsible for this arson.”

He said the arrested man’s charges have nothing to do with the three acts of vandalism, but, “He’s definitely not being ruled out as a person of interest in this investigation.”

Since the fire, information about the homeowner’s past has surfaced.

An article published in November of 1999 in the Daily News in Los Angeles described a two-year undercover operation in California that saw Zahariev, who went by the pseudonym Michael McKenzie, as one of the first four people arrested. In the end, 29 people were either arrested or wanted, and faced charges related to the trafficking of drugs and weapons, the manufacturing of illegal firearms and a murder-for-hire scheme. According to an article in the Toronto Star, a murder-for-hire charge was later dismissed.

Court documents from the United States dated December 2004, showed that Zahariev also fought to stay in the U.S., because he feared his life was in danger in Canada.

His claim was denied because he “fail(ed) to demonstrate…that he faced any danger upon his removal to Canada.”

Lentsch couldn’t speculate on motives for the attacks, but said the police aren’t ruling out a possible connection to the past incidents in the United States.

“Everyone involved, including the complainant (in the murder-for-hire case) are being looked at,” he said.

In the meantime, Lentsch said the family is being looked after.

“They’re staying at a place of safety,” he said. “The problem we have is we have two young children involved in this, that’s my concern.”

Meanwhile, the unnamed woman said she has never met the family who lives there, and they keep to themselves. Days after the fire, she said things are almost back to normal on the street.

“I’m not worrying about anything, I’m just a little scared,” she said. “I’ve been living on this street for 27 years now, and nothing like that has happened.” 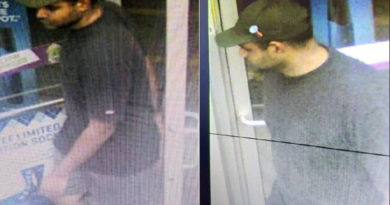