The storied Art Shoppe furniture store on Yonge Street has been sold for more than $40 million.

The Art Shoppe occupies the property on Yonge Street between Hillsdale and Soudan Avenues. It was established in 1936 and bills itself as “The largest fine furniture store in Canada with white glove delivery service.”

Considering the price tag of the transaction, nearby residents expect a large condominium development.

“Undoubtedly it will be a heck of a lot higher,” predicts president of the Oriole Park Association, Bob Blake, who lives just one street away from Yonge Street on Colin Avenue.

He added he will be sad to see the furniture store leave the neighbourhood.

“It’s certainly sad to see, because the Art Shoppe, as a neighbour if you like, was a very easy building to live with,” Blake said. “It was not a huge building in terms of height, it was an attractive place and was always well maintained.”

Ward 22 councillor Josh Matlow said neither he nor city planners have been approached by the new owner, but he has heard rumours.

“What I’ve heard from a number of people in the neighbourhood is that it was indeed sold and they’ll be coming with a proposal of roughly 50 storeys,” Matlow said.

While Yonge Street is included as an avenue in the city’s official plan, which means it’s slated for development, Matlow said he’s not sure if a building of that height would be allowed.

He cited an example of a developer asking the Ontario Municipal Board to build a 43-storey condominium near Duplex and Eglinton Avenues, and it was subsequently lowered to 38 storeys.

“And that’s even closer to the Yonge and Eglinton junction than the Art Shoppe is,” Matlow pointed out.

As a result, the applicant may not be allowed anything higher than the high-30s, Matlow said.

Blake said he understood the need for the developer to recuperate costs, but said it needs to be balanced with the concerns of local residents.

“The city has a city to run too, and we have inhabitants too and taxpayers who really don’t want to see themselves engulfed in a valley of huge buildings,” Blake said.

The Art Shoppe and Freed Developments did not respond to requests for comment. 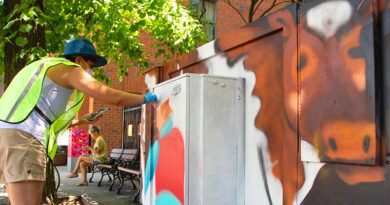