“The kids said to me ‘Mr. Curtis what do you think we’re a bunch of poor kids?’ when I brought in and put out bagels,” he said. “We put them on a table in the foyer in front of the office and I looked out of the corner of my eye and kids started picking up bagels.”

After Fleming closed and the student body transferred to John Polanyi Collegiate the program went with them. Not even the recent job action by the high school teachers’ union could stop the program. Curtis still arrives at What-A-Bagel on Bathurst Street between Lawrence and Wilson avenues at 7 a.m. every morning to pick up his breakfast bagels.

“For all these years they’ve been contributing the bagels which I then take to Baycrest Public School,” Curtis said. “I give them bagels for their breakfast club, they depend on us.

“Then I come over and here and I give us the bread and the bagels for our program and then what’s left over I give to the North York Harvest Food Bank.”

“He’s giving us anywhere from [5 to 10 kilograms] a day, Monday to Friday,” he said. “Every morning around 7:30 a.m. he brings in a couple of bags of different bread products, all kinds of different things.”

What-A-Bagel owner Brenda Kopmar said she was happy to donate some of their goods when asked.

About a year ago, brothers Joel and Steve Daiter, who own Daiter’s Fresh Market, also started providing Curtis with bagels, as well as continuing to make some for the morning chess club at Ledbury Park Elementary School.

“They asked us if we would give day old bagels for the breakfast club,” Joel Daiter said of Ledbury Park. “We said we will not, we will give fresh bagels.”

At Polanyi Collegiate, the breakfast club operates out of one of the teacher’s classrooms. A commercial toaster is provided along with various spreads.

“The Toronto District School Board also brings in food and what I bring in supplements that,” Curtis said. “If there’s anything not used I also share with the North York Harvest Food Bank.”

Curtis and other teachers said movies are shown which lend to the welcoming, social atmosphere of the club. He said that most of the students who stop by are those who have skipped the most important meal of the day as they rush out the door.

“A lot of the kids don’t eat at home so it’s kind of a way of catching them before school and giving them a meal,” he said. “It provides them with an opportunity to grab food here because they’re always hungry and they’re growing.”

Nearly all of those involved in this sharing of community resources expressed regret that Curtis would be retiring at the end of this school year, but, he said he is already working on lining up a replacement.

According to Kopmar, people like Curtis are not easily replaced.

“He’s a great guy, he’s a great representative of the school, he’s really gung-ho,” she said. “We don’t have enough teachers like that.” 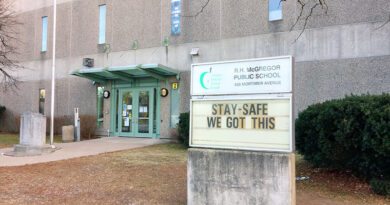